Forecast:  Only the surrender of Karabakh can give reality to  prospects for Armenia`s entry into NATO 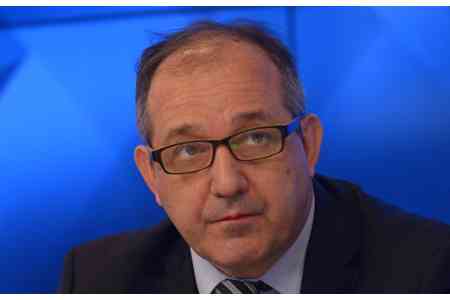 ArmInfo. Only the surrender of Karabakh can give reality to the prospects for Armenia's entry into NATO. Deputy Director of the Institute of CIS Countries, military  expert Vladimir Yevseyev expressed this opinion to ArmInfo.

"I can say that this is exactly what the United States and the United  Kingdom are seeking today. From this point of view, it is very  important to understand that even in the case of the theoretical  disappearance of Nagorno-Karabakh from the map of de facto  independent states, the Russian military bases will not appear in  Azerbaijan. The Turkish military are already present there. And this  is despite the fact that this is prohibited by the Constitution of  the Republic. And of course, Baku will not want to deploy our  military on its territory, knowing full well how it will affect its  relations with the West, "he stressed.

In this light, the expert considers the 102nd Russian military base  (RMB), located in Armenian Gyumri, as an outpost of Russia in the  South Caucasus of exceptional importance. According to his estimates,  the Russian bases in Abkhazia and South Ossetia cannot replace the  full-scale military base in Gyumri with its serious aviation  component. The 102nd RMB is unique in the view of Yevseyev, and in  its ability to restrain Turkey's regional ambitions.

In addition to the most powerful deterrent factor in Turkey, the  102nd Russian military base, according to an expert, gives Russia the  ability to influence the entire region, the supply of weapons to  Armenia, conduct military exercises in the republic, and deter  attempts by radical Islamists to influence the countries of the  region. Accordingly, according to his forecasts, the withdrawal of  the base from Armenia will lead to a sharp decrease in the influence  of Moscow in the South Caucasus, which can entail a threat to the  security of the subjects of the Russian Federation in the North  Caucasus.

According to the expert, Armenia and Artsakh will not be able to draw  out the 102nd RMB, since under the conditions of a significant  increase in Turkey's influence on Armenia, Azerbaijan may well decide  to attempt to seize all the territories of Artsakh. According to  Yevseyev, in this case we can expect provocations on the  Armenian-Turkish border from Nakhichevan, where the Turkish military  are already present. It is Nakhichevan that can become an auxiliary  base of Azerbaijan for the start of the war with Armenia over  Karabakh.

The 102nd Russian military base in Armenia was established on  September 1, 1994 on the basis of the 127th motorized rifle division  of the Transcaucasian Military District. On March 16, 1995, an  agreement was signed in Moscow regulating the activities of the base  in Armenia with a term of 25 years. In August 2010, Protocol N5 was  signed on extending the term of the Russian-Armenian treaty to 49  years - until 2044. Moscow rents the base for free, moreover, the  base is partially maintained at the expense of Armenia.  The total  number of military personnel of the 102nd base is about 5 thousand  people. The base is equipped with 74 tanks, 17 infantry fighting  vehicles, 148 armored personnel carriers, 84 artillery systems, S-300  and S-200 anti-aircraft missile systems. In 2012, over 200,  compatible with GLONASS and GPS navigation systems, modern Perun,  Grot, and Breeze navigators entered service. Since 2001, 18, based on  the Erebuni airport in Yerevan, Russian MiG-29s, as well as Russian  air defense systems in Armenia, have taken up permanent joint combat  duty.