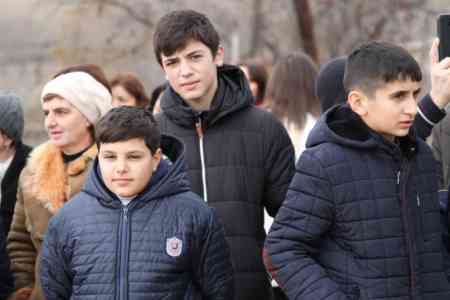 ArmInfo.For four years now the FPWC and VivaCell-MTS are successfully implementing “Alternative Energy” program in the village of Berdavan, Tavush region. The parties have implemented two projects of outdoor illumination in the village, installing lighting system along the roads to the village kindergarten, school, and other centers of community importance. The kindergarten and the musical school have also been provided with solar heating systems.

“Hand in hand with our partners, we strive to implement programs, which solve several problems: those programs help provide the farther villages with modern infrastructures, help save funds, as well as energy, and show people the civilized approach in using natural resources. Problems will be solved faster if people learn to save what they have and look for efficient solutions. Our nature gives us an opportunity for that. In 2016 we joined our efforts to solve the problem of illumination on the central streets in Berdvan. We launched a solar heating system in the village school last year. Today we have installed lighting system for the secondary streets. But our greatest achievement will be when we see people reject consumeristic approaches,” VivaCell-MTS General Manager Ralph Yirikian said.

The implementation of energy saving systems in the communities helps to ease their financial burden, liven up community life, and solve the problem of street safety in the nighttime, which is crucial in borderland areas. Berdavan is one of those rare borderland villages, where the street lights stay on throughout the night. The LED lights are also important in keeping environment sustainably clean.

As compared to other types of bulbs the LED bulbs are more efficient and have longer life span, consuming up to 80% less energy.

VivaCell-MTS (MTS Armenia CJSC) is Armenia’s leading telecommunications operator, having the widest 2G/3.75G/4G network reach and spreading a wide range of Voice and Data services all across Armenia. Having the best of the Armenian people interest at heart since its launch on 1st July 2005 and in a short period of time VivaCell-MTS has managed to build a nationwide network and a considerable customer base. VivaCell-MTS drives innovation and aims at always being at the forefront of any development servingthe Armenian mobile communications market.  The company follows the guidance provided by ISO 26000 (International Standard of Social Responsibility) and ISO/IEC 27001:2013 (Information Security Management System). For more information, visit www.mts.am

Mobile TeleSystems PJSC ("MTS") is the leading telecommunications group in Russia and the CIS, offering mobile and fixed voice, broadband, pay TV as well as content and entertainment services in one of the world's fastest growing regions. Including its subsidiaries, the Group services over 100 million mobile subscribers in Russia, Ukraine, Turkmenistan, Armenia and Belarus. Since June 2000, MTS' Level 3 ADRs have been listed on the New York Stock Exchange (ticker symbol MBT). Additional information about the MTS Group can be found at www.mtsgsm.com