Political analyst: The situation around Russian gas can form another  reason for the distrust of Nikol Pashinyan 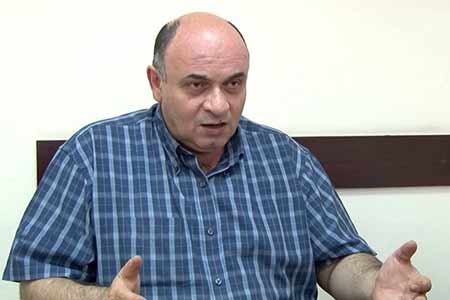 At the same time, he expressed confidence in  maintaining domestic tariffs for consumers at the same level, in  fact, at the expense of the Gazprom Armenia margin. Today, Gazprom's  wholly- owned subsidiary sells gas to the population for $ 290 per  thousand cubic meters. On the same day, Gazprom announced the gas  price increase for Armenia at the border from $ 150 to $ 165 per  thousand cubic meters.

"Even at the stage of implementing the Velvet Revolution, its leader  Pashinyan promised society several times to reduce the existing  domestic gas tariffs. Meanwhile, today he makes every effort to at  least prevent them from increasing. And if he does not succeed, the  increases in gas prices will the reason people don't trust his words  and steps. I think that Pashinyan's position in gas negotiations with  Putin leaves much to be desired, and if he wants to avoid another  increase in the cost of gas and all related processes, he will have  to understand certain concessions, "- he stressed.

At the same time, the political scientist expressed surprise at the  lack of negotiations on the formation of a new gas price for Armenia,  despite the fact that Yerevan was well aware of the expiration of the  terms of the previous prices. "Gas negotiations began literally on  New Year's Eve and today the parties are trying to reach some hasty  agreements," Yenokyan said.

According to a political analyst, a similar background and timeline  do not carry anything good to Armenia, since by doing so Moscow is  able to bring a political component to purely gas negotiations, in  other words, to draw out certain political concessions from Armenia  in exchange for maintaining the same gas price.

Meanwhile, according to analysts of ArmInfo, even in the face of  rising gas prices at the border to $ 165 per thousand cubic meters,  there is a potential for lowering domestic tariffs. First of all,  this is due to a significant decrease, if not complete leveling of  corruption risks around gas pricing as a result of the same change of  power in Armenia. In this regard, the new government, apparently, has  already voiced its demands to the Russian company in the light of the  changed rules of the game. And the material tax violations already  identified as a result of recent inspections by Gazprom Armenia are  the best confirmation of this. And, judging by the statement of  Pashinyan and his spokesman about the invariance of domestic tariffs,  these requirements are taken into account in one way or another by  Gazprom. In this light, the increase in gas prices at the border  seems to be the most acceptable compromise for both parties.