Alexander Krylov: Supporters of turning the CSTO into an influential organization are interested in the soonest overcoming of "Khachaturov`s incident." 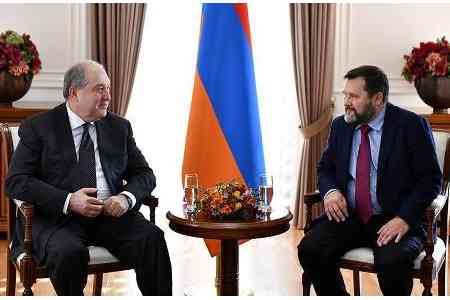 ArmInfo. Supporters of the transformation of the CSTO into an influential collective security organization are interested in overcoming the “casus with Khachaturov” as soon as possible, the President of the Scientific Society of Caucasus Studies, expert in the IMEMO RAS named after E.M. Primakov Alexander Krylov said.

Mr. Krylov, recently a round table on Caucasian issues took place in Yerevan. Who organized it and what are the results?

Indeed, on November 26-27, 2018, we held a Russian-Armenian round table “2018: WATERSHED YEAR FOR THE SOUTH CAUCASUS?” The round table was organized by the Scientific Society of Caucasus Studies in partnership with the Russian NGO Dialogue and our permanent Armenian partners - the Institute of Oriental Studies of the NAS RA and the Institute of the Caucasus.

Could you tell about the Scientific Society of Caucasus Studies?

The Scientific Society of Caucasus Studies was established in 2010, its goal is to comprehensively study the Caucasus in its close relationship with global development, to popularize scientific knowledge and achievements of modern Caucasian studies. The Society holds various scientific events; the round table held in Yerevan is the 15th in a row in eight years. Conferences were held in Vladikavkaz, Moscow, Rostov-on-Don, Paris, Pyatigorsk, Stavropol, Sukhum and Tskhinval. The round table “2018: WATERSHED YEAR FOR THE SOUTH CAUCASUS?” is the fifth event organized by the Society in Armenia. This event, like many other projects, was carried out in the framework of cooperation with the “Dialogue” NGO headed by Yury Ludvigovich Navoyan, who was among the founders of our society. At present, we are posting materials of the round table at the same time on the sites of the Society and the “Dialog” organization. We highly appreciate the attention paid to our event by the Armenian leadership. The Secretary of the Security Council of the Republic of Armenia Armen Grigoryan welcomed the participants of the event, then the meeting of the Russian participants with the President of Armenia Armen Sarkissian took place. During the meeting that lasted more than an hour with the President of the Republic of Armenia, we were able to discuss a wide range of various problems, including many problems in our bilateral relations. The friendly atmosphere of this meeting made a great impression on the Russian participants.

During the round table, many problems in relations between Armenia and Russia were discussed. Are these problems becoming more complex?

Relations between different states can not be ideal, without any problems. However, our bilateral relations are facing too many problems. At the same time, which is especially sad, security problems are also increasing. That is even in the field in which the common interests of the two countries are obvious. Therefore, during the round table, we paid special attention to the discussion of this problem, a report analyzing this issue under the title “Problems of Regional Security of the South Caucasus” was made by the permanent participant of our conference Vagharshak Harutyunyan.

To what extent does the incident related to Khachaturov continue to play its role?

In the context of the current domestic political situation, the problem of approving the new CSTO Secretary General has acquired a crucial importance for Armenia. In many ways, it becomes decisively important from the point of view of regional security and the future prospects of integration projects in the post-Soviet space. Therefore, we paid so much attention to this issue, not only during the round table, but also during discussions with experts and representatives of various political forces. As a result, the situation is as follows. The refusal to comply with the CSTO Charter for each of the member states of the three-year quota for the CSTO Secretary General is perceived by Armenia as discrimination of its own state and representatives of different political forces have common approach on this issue. It seems that there is complete unanimity in society on this issue. The same unanimity is observed in the support of the candidate nominated by Armenia for the post of Secretary General Vagharshak Harutyunyan. Nikol Pashinyan's choice in favor of this candidate seems to me quite reasonable: Harutyunyan was among those who set up the CSTO, he more than anyone else is aware of all the problems of this organization. He has never been involved in high-profile scandals, so all the concerns expressed about the possible repetition of "Khachaturov's incident" have no basis. Harutyunyan is considered a pro-Russian politician in Armenia, but even those political forces that are principled opponents of an alliance with Russia have not criticized this candidate.

Such unanimity in the context of the upcoming elections and the acute confrontation of various political forces can be explained only by the fact that Harutyunyan's appointment to the post of CSTO Secretary General is viewed by all political forces as crucial from the point of view of Armenia’s security interests. It will testify to the ability of Russia to protect the interests of its ally in the Caucasus and will testify to the effectiveness of the CSTO in ensuring the security of Armenia as a member state of this organization. Obviously, if this does not happen, it will cause an extremely negative reaction in Armenia. In the context of the upcoming elections, Pashinyan cannot agree to the appointment of the Belarusian representative as the CSTO Secretary General, Acting Secretary General Valery Semerikov's headship for another year and a half. So, if the leaders of the Republic of Belarus and the Republic of Kazakhstan continue to insist on the “Belarusian option”, and Pashinyan does not agree to any option other than Armenian, then the situation will become a stalemate. This means that negotiations on this issue can continue until the expiration of the Armenian quota - that is, another year and a half.

Obviously, neither the CSTO, nor the EEU, or Russian-Armenian relations will benefit from this situation. The best way out would be to make a decision based on the current norms of the CSTO Charter, which assigns to each of the member states a three-year quota for the post of the CSTO Secretary General. And all the difficulties that have arisen because of the "Khachaturov's incident" can be solved in the future by amending the Charter of the CSTO. Otherwise, a completely ridiculous situation may arise already with the Belarusian representative on the post of secretary general if his term expires ahead of schedule. If you follow the current logic of Alexander Lukashenko and Nursultan Nazarbayev, who supports him, it turns out that if a Belarusian representative for some reason the next day after being approved for the position of the Secretary General, ceases his authority, the post immediately should pass to the representative of Kazakhstan. And what if the same problem arises with him? It turns out an obvious nonsense that leads many experts to the conviction that the actions of Lukashenko and Nazarbayev are dictated by the fact that they act as lobbyists for the interests of Azerbaijan, which is not among the members of the CSTO. It is obvious that supporters of the transformation of the CSTO into an influential and efficient collective security organization are interested in the soonest overcoming of the "Khachaturov incident." The results of the CSTO summit, which will be held on December 6 in St. Petersburg, will show whether they enjoy the predominant influence in the CSTO.