Ambassador of Japan: Your people have a special genesis, amazing narture of endurance and optimism 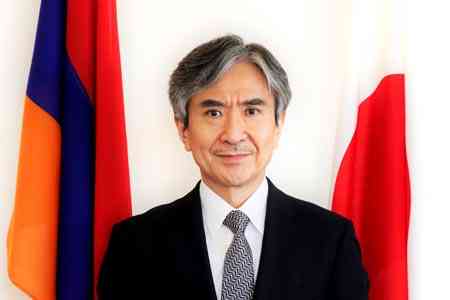 ArmInfo. In the second half of the 19th century, anticipating the beginning of the world trade intensification and the first signs of globalization, abandoning the traditional policy of isolationism, Japan took the path of the human capital intensive development, accompanied by a significant increase in education, thus creating a solid foundation for an unprecedented technological breakthrough. Overcoming obstacles, all the adversity and tragedies, a country having no  essential  natural resources, successfully became the leader of the world economy, setting an example of resilience and exceptional Eastern wisdom - an example highly desired for Armenia as it is today. The first serious direct contacts between Armenia and Japan began to form only after the devastating Spitak earthquake of 1988, when Japan extended a generous helping hand to us. And four years later, diplomatic relations were established between the current independent Armenia and Japan. In the interview given to the ArmInfo News Agency, courtesy of the newly appointed Ambassador of Japan to the Republic of Armenia, His Excellency Mr. Jun Yamadа, summarizes the thirty-year history of diplomatic and consular relations between our two countries, talks about international assistance in the upcoming  early parliamentary elections in Armenia, shares his opinion on the development of educational programs,  touches upon  the prospects of mutual investment protection, cooperation in the field of prevention and counteraction to the consequences of emergency situations and much more.

Your Excellency, last year Armenia and Japan celebrated the 25th anniversary of establishing diplomatic relations. How would you describe this period?

A quarter of century is already substantial history. We have come a long way to see the present state of ever intensifying relationship. Particularly I wish to congratulate the people of Armenia on overcoming enormous challenges immediately after the independence and winning the stability and international admiration today.

During his visit to Armenia in September of this year Japan’s Foreign Minister Mr. Tarō Kōno announced Tokyo’s intention to liberalize its visa regime with Armenia. What has been done in this issue, given that Yerevan has already liberalized this regime for the citizens of Japan?

Minister for Foreign Affairs of Japan Mr. Taro Kono’s visit in September this year was a really historic event in our bilateral relations, being the first ever such visit to Armenia. During this fruitful visit Minister Kono reaffirmed Japan’s commitment to contributing to further development of Armenia, announcing a new initiative aiming for human resources, infrastructure and business environment development.

Simplification of visa requirements for Armenian citizens was one of the measures in this framework. Specifically, beginning from October 1 this year Armenians visiting Japan for the purpose of tourism and seeing their relatives and acquaintances could also be granted multiple entry visas.

The numbers of Armenian people visiting Japan has substantially grown this year even prior to this new measure. I am convinced that the introduction of the new visa regime will promote people-to-people exchange between our countries even further.

On my part, I will do my best to bring more Japanese tourists, students, businessmen, etc. to your country which is so unique and rich in history, culture, incredibly beautiful landscape and very talented and friendly people.

Japan intends to join the international assistance provided to Armenia in holding early parliamentary elections (this was also announced during the visit of the Foreign Minister of Japan to the RA). What is being done towards this end and what are the expectations of the official Tokyo from these elections?

During the September visit Minister Kono announced that Japan will join the efforts of the international community to support the early elections of the National Assembly which, we believe, will have a crucial meaning for further democratic development of Armenia. Right now we are considering what could be the best way to contribute to the process. The various capacity building of election personnel not only for the December election but on a longer timespan could be one such way.

As Ambassador of Japan it is a great honor for me to support and witness the new development of Armenia. The country seems to be truly at a special stage in your own long history.

It is known that Japan provides assistance to Armenia in improving the skills of young specialists, in particular, young lawyers and diplomats. How many specialists have already been retrained in Japan, will this policy continue and what are the expectations from this assistance?

From 1993 to 2017, altogether 678 Armenian specialists have been trained in Japan. They were in the areas of public service, agriculture, energy, commerce, tourism, human resources, medical and social services, healthcare, etc. The program has been implemented by the Japan International Cooperation Agency (JICA).

Besides, 7 young diplomats were/are trained in Japanese language skills for 8 months, while others were invited to Japan to deepen their understanding of the country through exchanges of views with Japanese experts from the government, academia and private sectors.

In January next year Japan will invite 5 young lawyers to visit our country to attend various lectures in the field of Public Policy and Management.  This program is also within the framework of “Caucasus Initiative” which Minister Kono proposed in September.

Of course, we intend to continue such programs still further. In a sense, such cooperation in human capacity building will be the best way to further strengthen our already excellent bilateral relationship and ultimately the benefit will be quite mutual.

The draft of the agreement on mutual promotion and protection of investments is being discussed by the National Assembly of the Republic of Armenia (Parliament). But there are very few direct Japanese investments in Armenia, what is the reason for that, in your opinion?

For the moment the volume of investment between the two countries is still rather limited, mainly due to the lack of information about business opportunities on both sides. This situation is of course unsatisfactory given huge potentiality that exists between our two countries. Armenia is famously very rich in human resources in the area of information technology.

Japanese companies’ interests in Armenia are rapidly growing recently. That is precisely why the Japanese Government decided to conclude a new Investment Agreement with Armenia. When it becomes finally effective after the endorsement of your National Assembly, it will ensure free and stable corporate activities of Japanese enterprises operating in Armenia and vice versa.

One of the areas of cooperation between the two countries is interaction in the field of emergency situations, work is underway to develop a map of landslide zones, and assistance is provided in preventing earthquake risks. What other assistance plans are envisaged?

Indeed, we have the closest cooperation with the Ministry of Emergency Situation of Armenia. Since our two countries share the same challenge of various natural disasters, its prevention and mitigation are naturally priority areas for Japan to support Armenia. In 2008 Japan provided 28 fire-engines for Yerevan City, and 39 more will be provided to Lori, Shirak and Syunik regions next year. “The Project for the Improvement of Crisis Communication and Public Awareness for Disaster Risk Reduction” which aims to enhance the ability of crisis communication in Armenia is planned to be implemented next year.

On December 7th this year, on the day of 30th anniversary of the fateful 1988 earthquake, I wish to visit Spitak to pay tribute to all the victims once again and renew our determination to redouble our effort to fight the onslaughts of new disasters.

At the same time we deeply appreciate the warm support from Armenian people, in particular the donations for the Great Earthquake in March 2011. The MES staff of Spitak branch who visited Japan for JICA’s training kindly took the initiative to build a khachkar dedicated to the Japanese victims next to the memorial of Spitak Earthquake.

The Japanese side had previously provided assistance to Armenia in the field of energy. Will cooperation in this issue continue, and what specific areas in the energy sector might be of interest to the Japanese side?

The Yerevan Combined Co-Generation Power Plant was financed by Japan’s ODA loan and it is greatly contributing to the energy security of Armenia. Japan is willing to continue such assistance in the energy sector, including trainings in Japan for Armenian experts.

Two more projects which are compact in scale but rather future oriented are being implemented now: solar energy use in Spitak School No.8 and in Azatan Village. We are honored to be part of them and will further pursue such direction of new cooperation, with environment protection and energy efficiency in mind. These aspects are exactly in line with the priority of the Armenian government, too.

Considering your recent appointment, I would like to hear your first impressions of Armenia ...

I had a chance to visit Yerevan briefly in 1996, so this has been my first visit since then. For these 20 more years your country has managed to accomplish such a huge and positive change in every aspect of your life. All the visitors we received from Japan, including the Foreign Minister himself, testify to the astounding level of sophistication in culture, food and drink. The level of safety in the city is almost on a par with Japan, which is quite something if you ask any international travelers.

In fact, all such features of your special DNA were always very present even at the most difficult times of your recent history. I have a Japanese friend who was here in the early 1990s and he vividly remembers that. Even in the darkness of blackout people were very resilient, enjoying good – indeed world class – music and ever tasty Armenian food and drink! Once again, as in many past pages of your long history, your people confronted enormous adversity and heroically succeeded in overcoming it.