Ariel Cohen: The United States will act decisively to prevent violation of sanctions regime against Iran by Armenia, Georgia and Azerbaijan 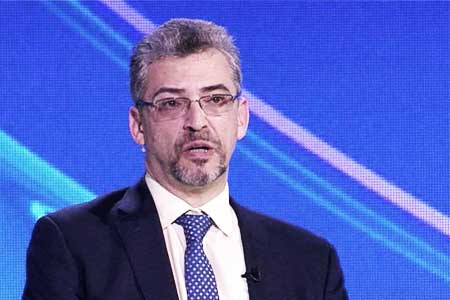 ArmInfo. The leading expert of the Atlantic Council (USA), Dr. Ariel Cohen, in an interview with ArmInfo, comments on the latest impulses in American policy around the South Caucasus and the Greater Middle East. He shares his vision for the reasons for the transformation of the US policy regarding the Iranian nuclear program. He forecasts the possible consequences of tightening the sanctions regime against Iran for Armenia, comments on the impact of sanctions on US relations with China and Russia, as well as the prospects for Israeli-Turkish relations.

Presidential Adviser on National Security John Bolton has been on a foreign tour in Russia, Armenia, Georgia and Azerbaijan since October 20. According to him, the goal of the regional visit is to meet with high-ranking officials to advance American interests in security matters. In your opinion, what are these interests in the Caucasus today?

Despite repeated confirmation by the IAEA of Iran’s fulfillment of its obligations under the Joint Comprehensive Plan for Action (JCPOA), after withdrawal from the nuclear deal with Iran, in November the United States intends to restore tough sanctions against the oil and banking sector of Iran. Why does Iran hinder the States so much today, given, by and large, the absence of a direct clash of interests between the two countries, and what is the ultimate goal of Washington’s such strategy regarding Tehran?

By signing the Joint Comprehensive Plan for Action on the Iranian nuclear program, agreeing to a deal with Iran, the United States, in my opinion, made a big strategic mistake. First of all, the IAEA inspections regime at Iranian nuclear facilities is not strict and extensive. We see that there were and there are still facilities in this country to which the inspectors were not allowed at all. Secondly, the development of new ballistic missiles in Iran is in no way limited, their arsenal is not limited either. Thirdly, the military aspects of the nuclear program and the levels of Iran’s nuclear enrichment were not frozen for good, but only limited to 10-15 years. Consequently, now the United States, will demand the freezing of the military part of the nuclear program without limiting the limitation period. Besides, Iran attempts to dominate on the whole Middle East, undermining the US allies-Sunni regimes, including in the Arab world: the countries of the Persian Gulf, Bahrain and the eastern provinces of Saudi Arabia. Iran supports radical Shiite forces from Lebanon to Iraq. It seems to me that the United States has enough reasons to restore a strict sanctions regime.

When taking the decision to withdraw from the nuclear deal with Iran on May 8, the US President was guided by the evidence of the Israeli intelligence of Iran’s secret nuclear weapons development program presented on April 30 by Israeli Prime Minister Benjamin Netanyahu. Given the fluctuations of the European participants in the JCPOA there is an opinion that many countries will lose from the next round of the crisis around Iran. Do'nt you think that, given the capacities of Israel in Congress and other departments that determine US foreign policy, this is the case when “the tail is wagging the dog.” To what extent does this policy correspond to American interests?

I think it is simply ridiculous to talk about the influence of a small Middle Eastern country - Israel on a huge, nuclear superpower - the United States. At the same time, Israel is also being pressured from the south by the Hamas movement in Gaza, and from the north by Lebanon, both supported by Iran. Also, let's not forget that countries with unlimited financial resources: Saudi Arabia and the United Arab Emirates are also striving to limit Iran’s nuclear factor and regional expansion of Tehran. And they have more appropriate instruments than Jerusalem.

Until recently, the US administration has not specially hindered the rather developed relations between half-blockaded Armenia and Iran. May this line be revised in view of the upcoming toughening of the sanctions regime against Iran?

In the light of the change in American policy towards Iran, pressure on the Armenian leadership during the visit of Adviser to the US President John Bolton to Armenia is indeed quite possible. Such pressure will be exerted in order to limit Yerevan’s ties with Tehran. More specifically, for example, limit technology smuggling. If I remember correctly, there were Armenian companies that were convicted of violating the sanctions regime against Iran, both financially and technologically. And now, when the sanctions regime is getting tougher, and their list is expanding, Bolton’s visit to the Iranian north-western border area- the South Caucasus is caused by the possibility of violating sanctions by Armenia, Azerbaijan and Georgia. The United States is serious enough and will act decisively to prevent such attempts.

Is the projection of Washington in the direction of deterring Iran, currently reflected in the confrontation in Syria and Iraq, part of a more global plan to restrain China? What is the role of Russia assigned by the United States in this projection?

US sanctions against Iran, of course, can cause pressure on both Iran and Russia. And it is quite possible that by doing this the United States will push Tehran and Moscow in the direction of Beijing. At the same time, I think that quite adult people who well understand and are aware of all the possible consequences of their own policies are engaged in the United States’s foreign policy. However, in the anti-American position of Iran there is nothing new for us, because chanting the slogans "Death to America" ​​and "Death to Israel" did not begin during Trump’s tenure, but during Ayatollah Khomeini’s tenure. As a result, the Iranian elites today are faced with a dilemma whether to integrate into the modern world or to continue to remain in isolation and in confrontation with most of this world. Meanwhile, there is no serious attempt by Tehran to reconsider its own policy, which contradicts to the regional and world status quo. Accordingly, it is a big question how Iran, and Russia as well, can somehow help or be useful to China. At the same time, the consolidation of Russia and Iran into the anti-American bloc led by China  is already a fact today. However, it is not clear yet how much this bloc will be consolidated and integrated in the future. Of course, first of all, it depends on the trade and economic interests of Russia, Iran and, first of all, for obvious reasons, China itself.

The Israeli mass media actively spreads information about the negotiations between Jerusalem and Ankara towards restoring full-fledged diplomatic relations. Why is Israel interested in Turkey today and to what extent do Israeli interests in the Greater Middle East correspond to those of Turkey?

There are no prospects for development of Israeli-Turkish relations, at least I do not see any. Unfortunately, Mr. Erdogan and his party have very deep anti-Israeli and anti-Semitic sentiments. And the warm relations existing between Israel and the secular Turkish elites have long been a thing of the past. Of course, some trade relations between Israel and Turkey may be maintained, but at the same time, even tourism between these countries has sharply declined. Erdogan’s own attempts to become the leader of the Sunni and Islamic world imply a confrontation with Israel. It is in this confrontation that the legitimation of his goal of becoming a leader of Muslims, including Arabs, lies. " Erdogan and his close circle have nourished all these sentiments for a long time already, for decades,  they are  deeply rooted and, unfortunately, I see no prospects for his refusal of such a destructive policy.