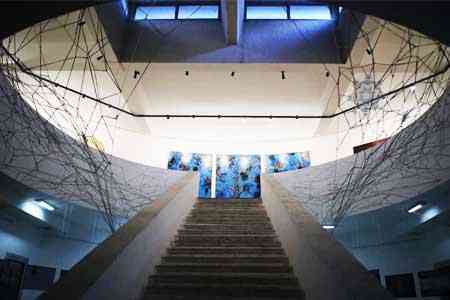 ArmInfo. The "HayArt" Museum of Contemporary Art in Yerevan hosts an exhibition of works by eight dozen authors of paintings and installations, representing 26  different countries of the world. It became possible to open the  round halls of the museum unique in their architecture for the unique  exhibition only thanks to the renovation of the museum at the  initiative of the Italian Embassy in Armenia.

As Rita Sharoyan, director of HayArt Cultural Center told ArmInfo in  an interview, the Italian Ambassador to Armenia visited the museum  with a working group of specialists during the preparatory work for  the opening of the exhibition of works by famous European authors of  modernity. ''They studied the state of the exhibition halls of  various museums in Yerevan in order to organize this exhibition. In  general, many guests from Europe highly appreciate the architecture  of our building and they really liked the design of the building,  but, unfortunately, it was in a rather poor condition, "Sharoyan  said.

The Director emphasized that the embassy representatives still felt  that the HayArt museum's capabilities were the most optimal for the  fulfillment of their ideas, but the lack of repair was a serious  hindrance. "We stated that we were ready to discuss the issue of  renvation. Head of the EU delegation in Armenia, Ambassador Piotr  Switalski was also very interested in this issue, who had also  visited the building of our museum. Various proposals were made to  us, the exhibition organizers proposed to repair the museum free of  charge if we agreed to provide exhibition halls for the exhibition,  and we happily agreed, because it was a great achievement for us,  because our museum would have acquired its original appearance again,  " Sharoyan said. She stressed that the repair work, in which Italian  specialists and even volunteers were involved, gave an amazing  result.  The exhibition of world modernists opened on September 28  and will last exactly one month, until October 25. Admission is free  for everyone. Artworks, installations, short films , and sculptural works are presented as exhibits. All the  interior of the museum is a the synthesis of movement, sounds and  colors.

To note, the "Hay Art" cultural center is the first Soviet Museum of  Contemporary Art in Yerevan, founded in 1972 by famous art critic and  public figure Henrich Igityan. A modernist-style building was erected  - an ensemble of several round rooms located above the ground - the  so-called "kruglyashek" was allocated for the museum on the main  avenue of Yerevan, Then in 1987, the museum was allocated the area of  the first floor of a new residential building, built across the  street due to too many storage rooms. In 1997, the Museum of  Contemporary Art for some reason left its unique architectural  building of concrete circles and moved to the first floor of a new  building that does not even have an entrance to the street. Thanks to  the heads of the mayor's office a unique architectural ensemble of  the first museum was fully used by commercial stalls and facilities.  For many years, being on the balance of the mayor's office, the  museum was completely abandoned, plaster collapsed in its halls,  mountains of garbage lay, it was completely unsuitable for organizing  exhibitions. For 2 decades, not a penny was allocated for its  restoration. Only in one of the halls, in a completely unattractive  atmosphere, some exhibitions of Armenian artists were periodically  organized under the special patronage of the mayor's office of the  capital. One of the latest exhibits was dedicated to the works of the  famous Armenian artist Eduard Isabekyan. According to the testimony  of museum workers who are not provable, Isabekyan's son Rector of the  Academy of Arts Aram Isabekyan gifted the former mayor of Yerevan  Taron Margaryan with one of his father's works to organize the  exhibition.