Pour Toi, France International Initiative Group launched a project to  build a monument to Charles Aznavour as a gift to France 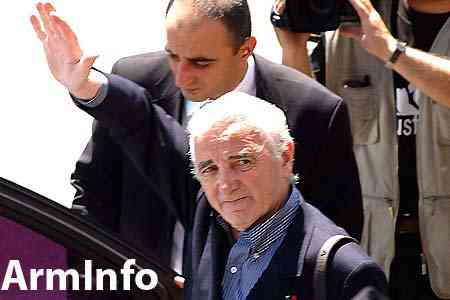 ArmInfo. In the days of farewell to the great chansonnier Charles Aznavour, the Pour Toi, France initiative group including citizens of Armenia, France, Russia and the USA was established to implement a project on building a monument to  Aznavour, which will be presented to France on behalf of the entire  Armenian people.

As one of the project initiators told ArmInfo, Armenians from all  over the world will participate in the building of the monument,  which will highlight its importance for the Armenian people and the  gratitude to France for the great chansonnier.  According to the  interlocutor, the project implementation process is planned to be  organized in four stages.  An international competition for the best  sketch of the monument will be held headed by a professional jury,  family members and friends of Aznavour. A popular vote will also take  place. At the second stage, it is planned to start raising funds,  including through various mechanisms - co-financing, partnership,  sponsorship. Then the stage of building the monument will begin and  by the anniversary of Aznavour's death the organizers of the  initiative intend to organize the ceremony of donating the monument  to the French people and installing it in France.  The great  chansonnier, composer, poet, writer and actor Charles Aznavour died  on October 2 in the age of 94. The world lost one of the symbols of  the twentieth century. ''Being a citizen of the world and  representing French culture, Aznavour always remained the son of the  Armenian people. It was natural for him to be both French and  Armenian at the same time. It is this essence that gave rise to the  great humanist, who has no national identity. At the same time,  Aznavour at every opportunity noted his Armenian origin and did a lot  for the benefit of his historic homeland. We, the Armenians, will  always treat him with special love and pride, "the initiative group's  statement reads.  The letter notes the confidence that there will be  a lot of people willing to participate in the creation of the  monument to Aznavour. Therefore, the initiative group decided that if  more funds than needed are raised they will be donated for charity,  in particular, to the Aznavour Foundation, which for many years has  been implementing humanitarian projects in Armenia and France. The  initiative has already been supported by the Ministry of Diaspora of  the Republic of Armenia.  The details of the project of the Pour Toi,  France initiative group will be published soon on a separate site, as  well as in social networks.