Tevan Poghosyan: None of the political forces act to overcome the challenges facing Armenia 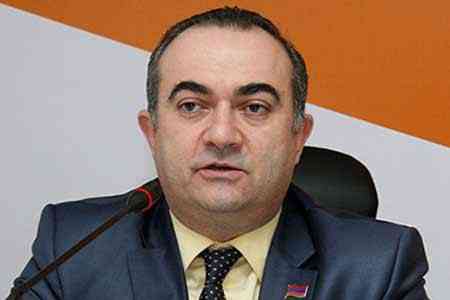 ArmInfo.In an interview with ArmInfo, the director of the International Center for Human Development Tevan Poghosyan comments on the latest domestic political events in the country. He emphasizes the need for political dialogue and the development of consensus as the only way out of the domestic political crisis, discusses the possible consequences for Armenia of the refusal of the opposing forces from a mutually acceptable compromise.

Mr. Poghosyan,  the essence of the events that took place on October 2 in Yerevan, is well known.  In what light do you view these events, in particular, their possible consequences?

The processes that crowned the evening voting in parliament on October 2 began early in the morning. In my opinion, we are talking about negotiations in which the Republican Party tried to somehow strengthen its position before starting, in fact, a political bargaining with the “Civil Contract”. In my opinion, political bargaining has long been an integral part of a very conventional political culture in Armenia. And under negotiations we, unfortunately, practically always mean bargaining, and not some fundamental interests of the parties, parties or the state. In this light, the Republicans apparently thought that by inventing the draft law “On Amendments to the Law on the Regulation of the National Assembly”, they thereby create a counterbalance to Pashinyan’s intentions to organize early elections in December of this year. The interest of “Prosperous Armenia” and the ARF in all this undertaking, apparently, should be sought from the results of the elections to the Yerevan Council of Elders. Today, the PA and the ARF in the parliament , respectively, 31 and 7 deputies. The elections in Yerevan showed the PA the prospect of being represented in the parliament of the next convocation by a faction of at most 8 or 10 deputies, and ARFD with a large zero. Hence the need for another political bargaining and , as a consequence, the emergence of this bill. In response to this, the second bidder , instantly demonstrated his own capabilities in the form of tens of thousands of people at the walls of parliament.

Thus, I personally perceive October 2 as the day of the failure of the perception of reality, in my opinion, still consisting in principled negotiations regarding the interests of development, and not bidding. Yes, some conversations will continue, but these will not be real negotiations of political forces. These will be statements, presentations of my own positions, which I personally perceive, rather, as a monologue. Meanwhile, the development of a political consensus in Armenia remains a pressing need. Whatever the consensus.

For example, in the matter of holding  the extraordinary parliamentary elections in the country?

In my opinion, early elections in Armenia are simply necessary today. And the sooner they pass, the better it will be for all of us. But this also requires the availability of alternatives in these elections, between which the voter could choose. Otherwise, we will see a repeat of the September vote of confidence in the Prime Minister in Yerevan. I have no doubt in this.

And what do you see as negative prospects for such a vote of confidence?

In how its results may be used . For example, the repetition of the mistakes of predecessors, since 1991 , accompanied by the collapse of the big ruling party of the ANM. And you can make the right conclusions and bring the decision-making process from one room, relatively speaking, to the people, in various discussion formats. In other words, Nikol Pashinyan has mechanisms for changing the situation and avoiding repetition of the sad previous experience at hand, it only remains to use them correctly. As an adviser to the president, I can mention his last few addresses to the people with a welcome culture of making joint decisions through negotiations and dialogue. Including   the circulation after the events of October 2.

You noted the presence of bargaining and trade  between the ruling political force and the RPA-ARF-PA troika. And what, actually, do they still want to receive from him these parliamentary forces?

First of all, I would add that bargaining is not only between them, other political associations are also involved in it. Simply, there is a public and non-public part. As for the troika, in my opinion, they need seats in parliament and political participation.

How, through the provision of “quotas,” as it  was done previously?

By delaying the existing uncertain situation . The whole question is in their interest. Are they in the development of the country or limited solely to holding the chair? Delaying this uncertainty increases their chances, at the same time giving hope for the deterioration of the situation in Armenia and, accordingly, a decrease in Pashinyan’s rating.

By the way, if they succeed in extending all this  to May 8, the Constitution allows the parliament to express a vote of no confidence to the Prime Minister ...

Of course, one  can only imagine what alternative of political bargaining will be opened up to parliamentary forces if they can reach out until May.

Name two scenarios: the most negative and the most positive, with which this whole situation can be crowned.

The most positive is the development of a joint decision to find a way out of this rather difficult situation. At its best, the political forces signed a joint communique. Finally, we must learn to live together, especially in the light of the big internal and, most importantly, external challenges facing Armenia. Therefore, I hope very much that the result of such negotiations will be precisely the consensus of the political forces around holding early elections as early as possible. At least this year. As for the negative scenario, I would like to note that in the event of delaying the existing domestic political confrontation, we will not have a single guarantee of what it can all lead to. Especially when one of the parties feels in this confrontation driven into a corner . A weak, cornered beast always starts to scratch. And I do not know what it means and where it can lead us. From this point of view, the use of a systems approach, planning and forecasting scenarios opens up quite alarming prospects. The actions of none of the Armenian political forces to resolve the numerous challenges facing Armenia are not directed. For me, any scenario that does not lead us towards jointly overcoming these challenges is destructive and problematic. History proves that we can only resist and overcome all these challenges jointly. Accordingly, any scenario of the internal political development of the situation for me is projected onto the future exclusively within this framework. Life will not end after the snap elections.

Do you accept the scenario when the existing parliament will still vote for the Prime Minister’s candidature?

I do not even want to consider such a scenario. Everything is possible in the world, but that is not the question. The question is how to avoid this negative scenario for the whole of Armenia. After all, it understands both sides. We understand that when a very dissatisfied mass of people gather somewhere, it can lead to anything. We know that Nikol Pashinyan has the opportunity to gather this mass, if someone didn’t believe in it, then on October 2 he could clearly see it. Therefore, the possibilities of the parties are known and therefore I consider it unproductive to consider and to trump their potential negative consequences. It is necessary to get together and search together, jointly develop a fundamentally new, positive way out of the situation. As an expert, I can say that the best way out of the situation is a joint, agreed decision on early elections. And these elections should be held as soon as possible. This is not the only way, but it is the most correct way. And the fact that people today can directly influence the choice of politicians in determining the vector of this political path is only positive for me. I have always dreamed of the appearance in Armenia of mechanisms allowing the people to convey their opinions, their discontent, to the top. And the main thing is that the leaders listen to this opinion.