Expert: Minimal participation of Armenian specialists in the project  of modernization of the second power unit of the ANPP cannot but  cause concern 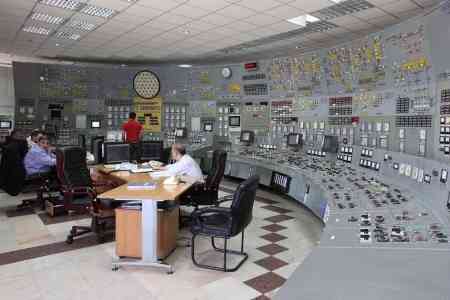 ArmInfo.The minimal participation of Armenian specialists in the project to extend the  life of the second power unit of the Armenian nuclear power plant  cannot but cause concern. On September 14, at the press conference in  Yerevan, answering the question of ArmInfo, the national expert of  the UN on energy Ara Marjanyan stated.

According to him, from the very beginning of the implementation of  the program, the country's authorities did not stipulate the  conditions for the mandatory participation of Armenian companies in  this project. Meanwhile, at one time, when the construction of the  nuclear power plant began, everything was envisaged, from the  training of personnel to the construction of Metsamor, the city of  nuclear scientists. Participation in the project, the expert  continued, would allow Armenian specialists to upgrade their skills,  be familiar with the installed new equipment, which would ultimately  have a positive effect on the safety level of the nuclear power  plant.  Moreover, many workers today work on nuclear power units of  foreign countries. "It is necessary to resolve this issue  deliberately and calmly," Ara Marjanyan said.

Answering the question about the Prime Minister's statement on the  need to fire  500 people at the station, he urged the authorities to  carefully and accurately approach the issue of cadres. "Most likely,  we are talking about a misunderstanding, because the training  process, the succession of generations is the key to the successful  functioning of the bloc," the expert said, also pointing out the  importance of solving the financial problems of the station's  employees. He recalled that in different years this issue was  constantly put forward by employees of nuclear power plants, which  demanded an increase in wages. "Perhaps, by means of reductions, an  attempt is made to solve this problem, but nothing can cause this  step except concern," Ara Marjanyan said.

He again pointed to the important role of nuclear energy in ensuring  energy security. Thus, the tariff from nuclear power plants, along  with the tariff from the Vorotan cascade of HPPs and the  Sevan-Hrazdan Cascade of HPPs, is the lowest in the country, which  has a positive impact on both the economy and the social situation of  the country's citizens. The vacation tariff from the Atomka is 6.9  drams per 1 kWh. electricity, which is 4-5 times cheaper than the  electricity produced by thermal units. In addition, the station is  basic and does not depend on the presence of wind or sun. In 2017,  the unit produced 2.4 billion kWh of electricity, which is 37.5% of  all electricity produced in the republic, earning 16.6 billion drams.  Moreover, Ara Marjanyan continued, filling the block with fuel only  once a year reduces dependence on prices for other energy sources,  which positively affects the financial situation of the country. The  expert stated that the presence of nuclear energy allows us to  develop science, production, train qualified personnel, and improve  the discipline of labor. "This fact allows Armenia to carry out  long-term cooperation with the Russian Federation in the field of  science and technology," Ara Marjanyan said.

On September 2, during a live broadcast on his Facebook page, RA  Prime Minister Nikol Pashinyan stated that "unnecessary" 500  employees were registered at the Armenian Nuclear Power Plant, which,  in fact, occupy the created additional posts, the need for which was  not.  Nevertheless, the premier continued, these people work, receive  wages, which exerts additional pressure on the tariff in the form of  3 billion drams. "This means that this amount is taken into account  in the tariff," the head of government said. According to him, so  many new posts appeared for known reasons - the authorities arranged  people for work in the context of elections, which was the reason for  the formation of the problem. At the same time, he noted that these  people will not be dismissed immediately, since in this case there  will be new social problems.  "We must do everything to ensure that  the situation on the labor market and the economy as a whole changes  so that solving one problem, not creating another," Pashinyan said.  Earlier, General Director of the Armenian Nuclear Power Plant Movses  Vardanyan informed ArmInfo that 1812 people work at the station with  an average salary of 300 thousand drams. For Armenia, the general  director continued, this is a rather big amount, but if we compare it  with the average salary of employees of foreign nuclear power plants,  it becomes obvious that this is a very small amount. "It is for this  reason that the ANPP staff constantly raises this issue," Movses  Vardanyan noted.  In turn, the veteran of the Armenian energy, the  executive secretary of the Union of Veterans of Armenian Nuclear  Energy Martun Gevorgyan in an interview ArmInfo called for the  optimization of the station management system. "At the station, about  40 people are involved in procurement procedures." When we restarted  the station in the 1990s, the supply department was five times less  and yet we managed to restart the nuclear power plant. "I do not  understand this humor," noted Martun Gevorgyan . Moreover, the expert  continued, a considerable number of veterans who are still able to  teach something to young people are being reduced today. "Without  them, it will be very difficult for the guys, it's a pity, but the  veterans still give their experience to the younger generation," the  expert explained.

The Armenian nuclear power plant consists of two units with Soviet  (Russian) WWER reactors.  The first unit was commissioned in 1976,  the second - in 1980. In March 1989, after the Spitak earthquake,  which killed 25 thousand people, the station's work was stopped. In  November 1995, in connection with the most acute energy crisis, the  second power unit of the station with a capacity of 407.5 MW was  involved. In March 2014, the Armenian government decided to extend  the life of the second power unit by 10 years - until 2026.  Completion of work is planned for 2019. The Government of the Russian  Federation allocated to Armenia for these purposes a state export  loan worth $ 270 million and a grant of $ 30 million.