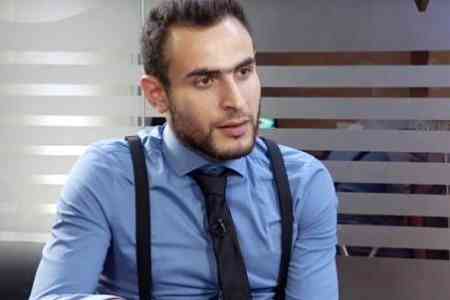 ArmInfo. The press secretary of the  first vice-premier of Armenia Ararat Mirzoyan Karpis Pashoyan is  applying for dismissal. Pashoyan reported this on his Facebook page.

"My friends, I have good news, I decided to resign, tomorrow morning  the statement will be on the table of Ararat Mirzoyan, I will  continue to assist Mirzoyan and his team." Nothing unprecedented  happened, just the intellect lost to military-patriotic  schizophrenia, life will show who does not respect the memory heroes,  "Karpis Pashoyan wrote.

To note, Karpis Pashoyan expressed his opinion on the heroes of the  Artsakh war, including Robert Abadjian, who died in the April war in  2016 in an interview with CivilNet. "The name of the same Robert  (Robert Abadzhyan - the hero of Artsakh, who died during the four-day  April war in 2016 - editor's notes) is much exaggerated, he and  others should be left alone." The young man with a childish face, he  probably did not understand at that moment , what is happening: And  now we use this name all the time, I do not think it should be done.  "The boy was only 18 years old: I think that this should not be  done," Pashoyan said.

After that, he was subjected to stormy criticism in social networks.  The Minister of Defense of the Republic of Artsakh,  Lieutenant-General Levon Mnatsakanyan, asked whether it is possible  to consider as manipulation and speculation the memory of the heroes  of the April war in 2016 and whether it is possible that their  actions were not a conscious self-sacrifice, said the four-day war  was an opportunity to recognize a new generation of Armenians. "The  18-20-year-olds, demonstrating their maturity and spirit, proved that  they are capable of surpassing their predecessors, but it is  unfortunate that some people doubt the conscious self-sacrifice of  Robert Abadzhyan and other heroes who gave their lives for the sake  of the motherland," said Mnatsakanyan . Moreover, according to him,  this is a disrespectful attitude not only to the memory of our  heroes, but to all those who are alive and in trenches, defending all  of us, including those who call into question the heroism of  Abadzhyan. Major Sarkis Stepanyan and his military comrades after the  publication of Pashoyan's interview appealed to the Prime Minister of  Armenia Nikol Pashinyan with an open letter demanding to remove the  official from the post, who committed boorish remarks about the  heroes of the April war, and give an official assessment of his  statements.

After sharp criticism in his address in social networks, Pashoyan  wrote on his Facebook page that his thoughts "some people are taken  out of context and misinterpreted." "I do not know why they do this,  maybe it's manipulation, I would never make such a comment, but given  the fact that, based on the speculation of some people, family  members of military personnel can misunderstand the voiced thoughts,  forced to make this statement, "Pashoyan said.

Nevertheless, the Office of the First Deputy Prime Minister and the  government apparatus continues to remain silent about this statement  of Pashoyan.