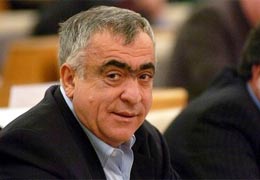 ArmInfo. The Armenian Police detained brother of former president - Sashik Sargsyan. As deputy head of the information and public relations department of the RA Police Edgar Janoyan told ArmInfo correspondent, Sashik Sargsyan was  detained by policemen on suspicion of illegal possession of weapons.

Earlier it became known that the Committee of State Revenues of  Armenia conducted searches in LLC "GLG Project Company" and in the  office of the charity fund "Pyunik", headed by another sibling of the  former president Levon Sargsyan. As a result of the organization's  activities, the amount of damage caused to the state is 300 million  AMD.

Sashik Sargsyan is known in Armenia as "Mr. 50%". His main business  was extortion from entrepreneurs half of the shares of certain  companies under the guise of "political roofing."