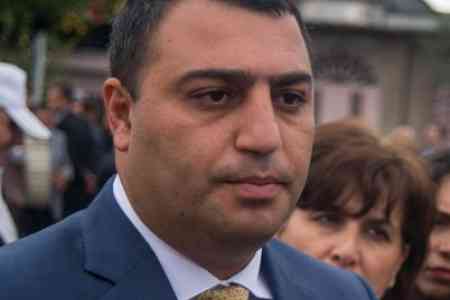 ArmInfo. Mayor of Echmiadzin Karen Grigoryan, who is the son of the "master of the city" General Manvel Grigoryan (until yesterday) announced his resignation.

This information on the Facebook network was spread by the activists  of Echmiadzin, who for the second day are carrying out protests  against the domination of crime in the city in the person of such  "authorities" of the criminal world as Grigoryan and some  Armenian-Russian-Italian businessman named "Don Pipo".

Grigoryan was detained the night before by the National Security  Service, and this afternoon the relevant court decided to arrest the  general, the Republican deputy. The arrest was justified by the fact  that a large arsenal of unregistered weapons, up to the mortars, was  found in the mansion and at the dacha of the general, as well as the  outrageous fact of appropriating a large amount of assistance from  parcels collected by schoolchildren to ambulances intended for  servicemen of the Armenian and Artsakh armies.

On this occasion, speaking in the video message, Prime Minister  Pashinyan stated that an uncompromising fight against corruption  began in Armenia. This means that the authorities are setting up  against themselves very influential people who have leverage,  possessing weapons of people. He did not agree with the opinion that  with such people it is necessary to seek a compromise and turn a  blind eye to their deeds so that "all was well".

Pashinyan noted that he was not going to make any compromises and  that the people did not bring him to power so that he would become a  part of this corruption system. Pashinyan stressed that for many  years Armenia was robbed and continues to rob. And with this it is  necessary to quickly finish and cleanse the country of corruption. He  stressed that he was not going to compromise for the sake of  preserving power.

Speaking about the arrest of Manvel Grigoryan, Pashinyan expressed  his indignation that he had found a large number of provisions and  gifts that schoolchildren, students, businessmen in Armenia and  abroad gathered in bitches to sprinkle them on the participants of  the April war. And Manvel Grigoryan fed all this help animals of his  own zoo. For this and not only for the storage of weapons, the  general was arrested.

Moreover, Manvel Grigoryan reached the level of impudence that closed  the streets of Echmiadzin, where his houses were located and blocked  movement on them. "In Armenia, where I am prime minister, there can  be no such phenomena, regardless of who is the author of such events  - the hero of the Artsakh war or a member of the family of the prime  minister." The soldier who rents a soldier is not worthy of any  forgiveness," Pashinyan said. It should be noted that the Republican  Party was the only political force that expressed its indignation in  connection with Grigoryan's arrest.