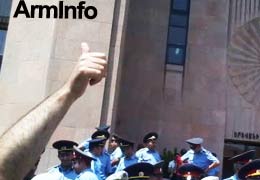 ArmInfo. The action of the "Civil Treaty" party against the forthcoming premiership of Serzh Sargsyan continues.

Members of the party marched for 10 days, from Gyumri, reaching Lori  region. At present, they are from Lori sent to Yerevan.  On the eve  of the action, members of the party "Union of National  Self-Determination" and the civil initiative "Renounce Serzh" joined  the participants of the rally, who, incidentally, in the last few  days collect donations from citizens in order to send Serzh Sargsyan  to retire on the streets of Yerevan.

As part of the protest actions, the leader of the State Duma, MP  Nikol Pashinyan sealed the speedometer's lens on the Sevan-Yerevan  road the day before, the marchers also blocked the road for some  time. The police warned oppositionists of the illegality of their  actions and called for adherence to the norms of law and order.  The  day before the police detained two members of the State Duma, who  tried to inform the citizens about the upcoming rally in Yerevan on  April 13.

The police said that they were detained on charges of damage to  public property, but later the oppositionists were released.

On April 13, a rally of the State Duma on the Liberty Square is  expected, the action will last 4 days, and on April 17 - on the day  of the prime minister's election, the oppositionists intend to block  the entrances to the building of the National Assembly in order to  obstruct the voting.

It is noteworthy that on April 13, the "Yerkir Tsirani" party intends  to hold a rally on the "Liberty" Square, however, it does not plan to  join the DG action. The leader of "Yerkir Tsirani" Zaruhi Postanjyan  believes that simultaneous holding of two rallies in one square will  not create problems.

Today, on the day of the inauguration of the 4th president and the  resignation of Serzh Sargsyan, the rally intends to hold the  opposition front "For the sake of the state of Armenia".