2018 is declared the "Turkmenistan is the heart of the Great Silk Road" year in Turkmenistan, 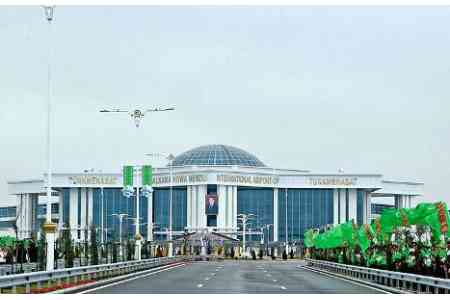 ArmInfo. At the initiative of Turkmen President Gurbanguly Berdimuhamedov, 2018 was marked in the country under the motto "Turkmenistan is the heart of the Great Silk Road". The press service of the embassy of Turkmenistan in Armenia told ArmInfo.

"For many centuries, through the territory of Turkmenistan, which from time immemorial was called" the crossroads of seven roads, "there were numerous caravan routes, which served as roads for trade and cultural cooperation between the peoples of the East and West. In a new historical era, regional projects, including in the energy and transport and communication fields, which are designed to promote, strengthen mutually beneficial trade and economic relations and culture tour-humanitarian ties between Central Asia and other regions," the diplomatic mission said.

It is reported that within the motto of the year on February 26, the administrative center of Lebap region, Turkmenabat city, with the participation of the leader of the Turkmen state, started the mass sports competition "Great Silk Road", including track and field cross-country, bike ride and international rally "Amul-Khazar 2018". It is symbolic that their route lies along the legendary ancient route, which is being revived now in its new quality, the core of which falls on the territory of Turkmenistan.

As is known, in 2009 President Gurbanguly Berdimuhamedov initiated the international motor rally "Silk Road-2009" on the route Kazan-Ashgabat. In this connection it is symbolic that in September of this year in Turkmenistan there will also be a major competition of motor sport masters - the Amul-Khazar 2018 rally, which is included in the program of sports action under the motto "Turkmenistan is the heart of the Great Silk Road". At this stage, the country is actively preparing for international competitions - the Amul- Khazar 2018 rally, a preliminary drawing of the route has already been prepared, it is divided into five stages. These are Amul - Mary, Mary - Derveze, Dervese - Turkmen Lake, Turkmen Lake - Yangala, Yangala - Avaza. On the same day, President Gurbanguly Berdimuhamedov took part in the opening of the international airport in the administrative center of the Lebap region - Turkmenabat.

The construction of a new air harbor was carried out by the Turkmen construction company Gundogdy (Voskhod). The new airport meets all modern requirements for such facilities. The length of its runway is 3800 meters, and the width- 60 meters, which allows you to take aircraft of all types. President Gurbanguly Berdimuhamedov, speaking at the opening ceremony, noted that the new air gates are designed not only to meet the needs of the eastern region in air transportation, but also to emphasize the status of Turkmenabat, which turns into a major industrial center of Turkmenistan.

The opening ceremony was made by the representative of the Guinness Book of Records, Shade Subashi- Gemidji, who noted that the passenger terminal of the new airport was built in the form of a star, and the area of this image is the largest in the world. Sheida Subashi-Gemidji reinforced her words with a special certificate, handing it over to the head of the Turkmen Airlines service. Then at the ceremony, the representative of the Munich International Airport Lorenzo Di Loreto, who noted that the new air harbor is fully ready for work and will perform its mission with dignity. He also presented a certificate confirming the high level of technical equipment of the airport and its compliance with world standards.

At the end of the ceremony, the airliners of Turkmen and foreign companies landed in the new air harbor.