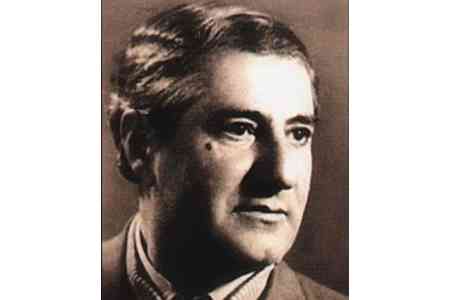 This year it is dedicated to the 110th anniversary of the composer, teacher, People's Artist of the USSR Grigor Eghiazaryan. Grigory Yeghiazaryan is one of the founders of the modern Armenian composer school. Among his students are Alexander Ajemyan, Emin Aristakesyan, Grigor Ahinyan, Edgar Hovhannisyan, Geghuni Chichchyan,Martun Israelyan and many other composers. Grigory Egiazaryan composed music mainly in symphonic and ballet genre, wrote symphonic poems, symphonies, ballets, romances, music for theater and cinema.

Since the foundation, the festival of Armenian composer art has been held under the high patronage of RA President Serzh Sargsyan. The organizer of the festival is the Armenian State Symphony Orchestra. This initiative is in the center of attention of the RA Ministry of Culture, and the ministry sponsors the festival. The artistic director and chief conductor of the Armenian State Symphony Orchestra, Sergei Smbatyan, stressed the importance of the Festival of Armenian Composers' Art. "Some people always say that the works of contemporary composers are not being performed, but the festival of Armenian composer's art proves the opposite. The festival has a very important mission and purpose. We must preserve our national culture, and society must see our heroes, those who create our contemporary music, "said Sergei Smbatyan. It should be noted that much work has been done in the framework of the festival in recent years. Symphonic and chamber works of more than 50 Armenian composers were digitized, more than 200 works were recorded, as well as premieres of more than 150 works by Armenian composers. This activity is aimed at the preservation and development of cultural heritage. Within the framework of the festival of Armenian composer art, the compositions of Grigor Eghiazaryan were also digitized. The organizers of the festival are trying to find the archives of the composer. His writings are mostly manuscripts and very poorly preserved. Several works were published from 1930 to 1940. The Armenian State Symphony Orchestra found chamber compositions by Grigor Eghiazaryan in the archives of the Conservatory and individuals. The team is trying to find symphonic works of the composer in order to restore the notes and in the future to include them in concert programs. Within the framework of Gregory Yeghiazaryan-Fest there will be 5 concerts. Works by Grigor Eghiazaryan, his students and also contemporary Armenian composers will be performed. The works of Alexander Harutyunyan, Arno Babajanian, Simon Hovhannisyan, Gagik Ovunts, Valery Sargsyan, Vagharshak Kotoyan, Geguni Chichyan, Eduard Baghdasaryan, Alexander Ajemyan, Barsegh Kanachyan, Stepan will be presented at the festival. Lusikyan, Eduard Abrahamyan, Vache Sharafyan and other composers. A separate evening will be dedicated to composers living in the Diaspora: chamber pieces by Richard Yardumyan, Alan Hovhannes, Harutyun Dallalyan, Nubar Aslanyan,Konstantin Petrosyan will be presented.