Rasim Mousabekov: Earlier appointment for presidential elections in Azerbaijan may allow reaching some breakthrough in Karabakh talks this year 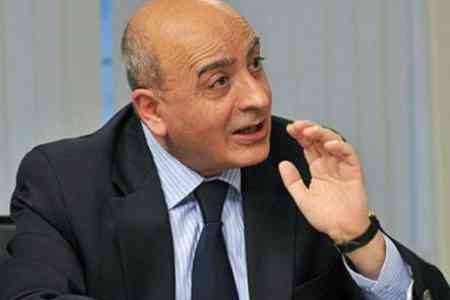 ArmInfo. In his interview with  ArmInfo news agency, Azerbaijani MP, lawmaker  RasimMousabekov discusses the latest internal  political flows in  Azerbaijan. He shares his vision of the settlement of the Karabakh conflict, the geopolitical situation around the South Caucasus, Iran, the possibilities of projections of  Middle East unsustainability  in our region.

In one of your interviews, you linked the recent decision to assign in anticipatory   the presidential elections in Azerbaijan from October to April 2018 with the upcoming transformation of power in Armenia, which will take place at the same period .What is the reason of such interconnections  ?

The transfer of presidential elections in Azerbaijan for six months ahead is conditioned by many circumstances. The media referred to them with reference to the officials of the Presidential Administration. I just mentioned among the reasons for this also  the ongoing negotiations on the Karabakh settlement. In March-April, the reforming of the supreme power in Armenia should take place, and, therefore, the resumption of substantive negotiations could be expected no earlier than May. And the summer holidays and autumn presidential elections would prolong the pause in the negotiations until late autumn. As a result, the negotiation process could be stalled. The transfer of the presidential elections in Azerbaijan for April will not reduce the pace of negotiations and try to reach a breakthrough on them already this year. Whether it turns out successful or not depends on the willingness of the parties to make difficult compromises.

And what do you mean speaking of complex, breakthrough generating   compromises in these negotiations?

I do not participate in the negotiations directly. Therefore, based on the information available to me, I believe that the basis of the negotiations is still the Madrid Principles, and its version, known as the Kazan Document, has not been archived and its relevance still remains. Russian Foreign Minister Sergey Lavrov, during his recent meeting with the Italian Foreign Minister chairing the   OSCE,while  speaking about the Karabakh settlement, noted that it is impossible to resolve all issues by one document, and the process of implementing possible agreements will be phased. I believe that the demand of Baku for Armenia's immediate and complete de-occupation of the areas stipulated in the well-known 822, 853, 874, 884 resolutions of the UN Security Council and Yerevan's counterclaim on Azerbaijan's consent to the secession of Nagorno-Karabakh through a referendum mechanism led the talks to a dead end. Perhaps the solution is in   more fractional steps with exchanges, when the parties to the conflict do not immediately receive everything, and step by step, making concessions and receiving in return certain bonuses, move forward. For example, immediately with the adoption of the "framework agreement", 2-3 regions are liberated at first, along with a peacekeeping operation and the opening of communications between Azerbaijan and Turkey for Armenia. This is not so less if one takes into account that Armenia can get a railway exit through Turkey to Europe and the Middle East, and through Azerbaijan (Nakhichevan) to Iran, as well as to Russia, Central Asia and China. Nagorno-Karabakh can be approved by Baku for aviation communications. Increasing the level of confidence and reducing confrontation will allow us to move on to the next step, during which it is possible to agree on the intermediate status of Nagorno-Karabakh, which allows it to be included in the political dialogue and carry out economic and economic activities with access to foreign markets. In return, it is possible to carry out de-occupation of another 2-3 districts. It is important to ensure positive dynamics of the settlement process and, in an atmosphere of growing confidence, many issues that seem insoluble today can find a mutually acceptable compromise.

Do you see the availability of necessary environment for such serious compromises between the parties to the conflict?

The foreign ministers of our countries note the constructive nature of the negotiating round started. Although incidents still occur on the contact line, there are wounded and killed, but the tension has significantly decreased. There is agreement to increase the size of the group of the special representative of the OSCE chairman Kasprzyk, which monitors the ceasefire. So let's be cautious optimists. A breakthrough in negotiations should sometime happen. After all, the alternative to a peaceful settlement is not the infinite preservation of the current "status quo," but a full-scale and bloody war that neither Azerbaijan or Armenia nor our neighbors in the region need.

Do you see internal political reasons for holding anticipatory presidential elections in Azerbaijan?

Of course, there is also an internal political aspect, but it is not connected with the danger coming  from the opposition. The status of the ruling elite and the first persons in Azerbaijan, as well as in Armenia, for today looks invulnerable. In Armenia, a deep reorganization of the government is expected in April. In Azerbaijan, this will also happen not in autumn, but in the spring after the April presidential elections. In accordance with the Constitution, the Cabinet of Ministers will resign in full staff. The government of Azerbaijan expects both structural and personal changes. After all, there are many elderly people who occupy their posts, almost two decades.

Assistant to the President of Azerbaijan on foreign policy issues, NovruzMammadov actually conditioned the decision on the reassignment  of the elections: "the probasbility that the negative processes taking place in the South Caucasus region and neighboring regions will gradually become acute and will have an impact on the region where Azerbaijan is located." What processes are assumed, in your opinion?

I believe that the situation in the Middle East (Iraq, Syria), Iran, as well as the growing confrontation between Russia and the United States and NATO, are meant  here. There is a high probability that the processes will go through a negative scenario and can reach a stage when Azerbaijan's  multi-vector balanced foreign policy, and Armenia's   "complementarity"-based policy will turn difficult to implement. Attempts will be made to  force us  to take   this or that side, and the deviation from this can be accompanied by growing pressure, both from Moscow,  from Washington and Brussels. Nothing good promised by that  for the region, both in terms of security and development.

As we see from the fighting between the Turkish army and the Kurdish formations on the territory of Syria, the actual liquidation of the "Islamic state" in Syria and Iraq did not lead to peace and tranquility in the Middle East. Are you looking at the prospects of projecting Middle East instability in the South Caucasus? And what impact can this have on the smoldering Karabakh conflict?

It is obvious that the situation in the Middle East will not settle  soon. Of course, there are some certain risks for the South Caucasus , and I spoke  it  out above. But for now, I would not directly project the Middle East crises in our region. I do not see any direct connection with the Karabakh conflict and the prospects for its peaceful settlement.

January events in Iran could not but worry neighboring Azerbaijan. Is the denouement of them, i.e.the retention of the power by  ayatollahs,  of Azerbaijani interests? And for how long, according to your forecasts, will the current regime succeed in retaining power?

Baku conducts a course  of non-interference in internal affairs in respect  to Iran. Azerbaijan, after the release of the IRI from under the sanctions regime, develops trade and economic relations with this country, implements large-scale projects. While Armenia was unable to implement an insignificant (about 100 million cubic meters) project for swap gas operations from Iran to Georgia, Azerbaijan is supplying Nakhichevan with gas for this scheme for decades. Last year, we began to receive Turkmen gas through Iran, increasing our own gas supplies to the Turkish and Georgian markets. The realization of the "North-South" railway route has been launched, for which Azerbaijan allocated a loan of $ 500 million to Iran. In turn, Tehran intends to invest in a large car assembly plant in Neftchala and a  medicines plant  in Priallakhi. It became  possible to overcome many disagreements on delimitation of the interests of the Caspian countries and to sign an agreement on the status of the Caspian at the summit in Kazakhstan already this year. In one  word, Azerbaijan is interested in Iran being a sustainable and predictable partner. There were earlier unrest and protests in Iran, but so far the regime coped with these challenges. In the near future, I see no signs of a deep crisis of the ayatollah regime, although changes are taking place in the world and the evolution in the neighboring country is also inevitable. For all of us in the South Caucasus, it is desirable that the changes in Iran do not acquire such destructive character that we see in the Arab countries.

How do you see the prospects for the continuation of the "non-alignment policy" of Azerbaijan? How much does this policy meet the objective political situation, considering  the world's trend towards greater integration and globalization?

The policy of non-alignment does not at all imply isolation from the processes taking place in the world. It is not directed against integration and globalization. Let me remind you that about a hundred states participate in the Non-Aligned Movement. The participating countries merely commit themselves to non-aligned status. Taking into account that Azerbaijan does not set itself the goal of joining NATO or returning to the pro-Russian Collective Security Treaty, participation in the Non-Aligned Movement merely states such a choice.