Sharmazanov: When Serzh Sargsyan promised not to claim the post of  prime minister, there were other political realities 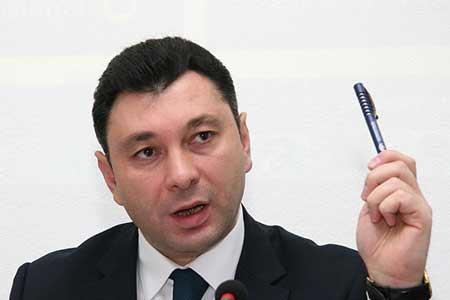 ArmInfo."At the moment, the ruling party does not have an officially appointed candidate for the post of prime minister, all candidates are "nominated" by the press  at their discretion. As for us, we need to hold a meeting for  discussion and nomination of candidates,"on December 19 in a  conversation with a reporter ArmInfo was told by the Vice Speaker of  the Armenian Parliament Eduard Sharmazanov, referring to the  following one after another statements of the RPA representatives  that the only and irreplaceable candidate for the post of the Prime  Minister of Armenia after its transition to a parliamentary form of  government Is Serzh Sargsyan.

The Vice-Speaker did not exclude the possibility that Serzh Sargsyan  or Karen Karapetyan will not be a candidate for the post of prime  minister in April 2018. "When the time comes, we will hold a meeting  headed by the President of Armenia and discuss all candidacies. The  word of Sargsyan, of course, will be decisive," Sharmazanov stressed.

Nevertheless, Sharmazanov, echoing the statements of his fellow party  members, said that the most prepared and acceptable candidate for the  post of prime minister of Armenia is Serzh Sargsyan. "I simply do not  know the more wise and well-trained figure in all spheres, from the  sphere of defense and ending with foreign policy." Besides, do not  forget that it is Serzh Sargsyan who has been negotiating for a long  time on the settlement of the Karabakh issue, emphasized the  vice-speaker.

At the same time, Sharmazanov noted that regardless of who becomes  the prime minister, the current president is still the head of the  ruling party. Sharmazanov noted that Karen Karapetyan is also an  outstanding statesman, but the powers of the current prime minister  and head of the Cabinet after 2018 are completely different. Since  2018, the prime minister will be responsible not only for the  economic component of the Cabinet's policy, but also for domestic  political and foreign policy. "This is a very heavy burden, not  everyone can bare, and we will decide together on whose shoulders we  should assign it," Eduard Sharmazanov noted.

Parrying on the remark that the nomination of Serzh Sargsyan for the  post of prime minister in 2018 would be a violation of his promise  before the constitutional referendum, when the president promised not  to claim the post of head of the Cabinet in the event of passing the  draft reform to the Basic Law, Sharmazanov remarked: "When Serzh  Sargsyan promised this, there were not a number of events that  occurred afterwards - for example, there was no April war. There are  thousands of cases in history when, under changed political  circumstances, the plans of those or First and foremost, Serzh  Sargsyan will be guided by the interests of the state, and he needs  all our people in the post of prime minister, it's not his will, so  the circumstances have been formed," the vice-speaker said, while  ignoring the fact that in big politics it is not accepted to make  promises for several years ahead, taking into account the inevitable  changes in the realities.

Currently there are two candidates for the post of the Prime Minister  of Armenia after the transition to the parliamentary form of  government - President Serzh Sargsyan and the head of the Cabinet  Karen Karapetyan. Sargsyan during his last interview assured that he  had not yet decided on his political plans.  Earlier, he assured that  if he passed the project of constitutional reforms on Armenia's  transition to a parliamentary form of government, he would not take  the post of prime minister. Meanwhile, recently the members of the  ruling Republican Party one by one declare that the most suitable  candidate for the post of prime minister after April 2018 is Serzh  Sargsyan, and no one in his post can replace him.

Prime Minister Karen Karapetyan, responding to a question about his  plans after April 2018, stated that he would continue to head the  Cabinet with pleasure. Serzh Sargsyan considered this Karapetyan's  aspiration "healthy", and his work and the work of the Cabinet he  evaluated positively.