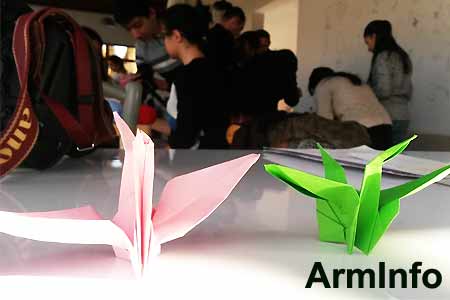 ArmInfo. On September 9, the Pan-Armenian Arts and Crafts Festival under the name "Revival of Culture" starts in Dilijan. "The aim of the festival is to solve a  number of issues of state policy and the development of community  tourism.

This variety of tourism attract tourists to rural communities, providing economic activity and allowing communities to open their potential, opening up new opportunities for them," the first deputy chairman of the State Committee for Tourism Ministry of  Economic Development and Investments of Armenia Mekhak Apresyan  stated September 5 in Yerevan.

The festival will show samples of Armenian carpets, and arts and  crafts - blacksmithing, woodcarving, samples of national cuisine,  etc. "This festival is an opportunity to present the culture of  Armenian regions and Artsakh - songs, dances, national instruments,  as well as the tourism potential of the region, as well as targeted  assistance will be rendered to returnees, they will be given the  opportunity to show their work, exchange experience and sell their  work," said the President of the Foundation for the Promotion of  Culture and Tourism Mariam Minasyan. Mayor of Dilijan Armen  Santrosyan in his turn noted that earlier the Armenian Dilijan was  known as a tourist city. Thanks to such festivals, the tourist season  again becomes active in it.

During the festival, all regions of Armenia and Artsakh will be  presented with the opportunity, with the help of IT technologies, to  present their region and the tourist attraction of this area.

To note, the festival is organized by Media Onix, the Culture and  Tourism Promotion Foundation with the assistance of the State Tourism  Committee of the Ministry of Economic Development and Investments of  Armenia.