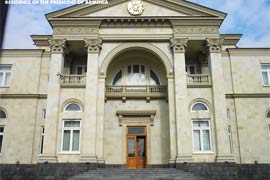 ArmInfo. The meeting on the  agenda of Armenian-Indian economic cooperation was held in the  residence of Armenian President.

According to the head of the country press service, Armenian  Ambassador to India Armen Martirosyan reported to President Serzh  Sargsyan about the work carried out to deepen and expand bilateral  cooperation in promising areas.

Stressing that Armenia and India celebrate 25th anniversary of the  establishment of diplomatic relations this year, Sargsyan noted that  this is a good opportunity to sum up the results of the past path and  outline directions for expanding bilateral relations, especially  their economic component. According to the President, for this there  are all the makings, because over the recent years, historical  friendly relations have been translated into a warm interstate and  partner plane. "Despite the high level of Armenian-Indian relations  based on strong historical ties, nevertheless, I believe that the  existing potential has not been used in full. The Indian economy is  one of the fastest growing in the world, and relations with this  country are a direct necessity, and first of all deepening of  economic relations. Undoubtedly, the role of Armenian-Indian  intergovernmental commission is of great importance in this matter,  agenda of which should be refreshed with new and targeted issues that  must be diverse - starting from cooperation in the field of  information technologies ending with agriculture, tourism, diamond  cutting, "the Armenian leader said. At the same time, he noted that  there are many successful examples. As an example, Sargsyan cited the  activities of the Armenian-Indian center of excellence in the field  of Information and Communication Technologies (ICT), which he  believes is doing a lot of work.

"We also attach importance to the assistance of India on creation of  computer network in the regional schools of the republic, which, in  cooperation with ICT, is also involved in the implementation of  educational programs. In general, in India, serious work has been  done in this area, they have great experience and serious  opportunities, and based on this, taking into account our  capabilities in this area, cooperation in this area should be more  intensive. I also want to give an example of our cooperation in  education and science. Many know that thousands of students from  India are educated in Armenia today, of course, in parallel they get  acquainted with our culture, history, and returning to their homeland  join the ranks of our friends, "Sargsyan said. And in this context,  he noted that he had not been in Yerevan Medical University for so  long and got acquainted with the programs being implemented.  According to him, the university administration is ready to make  efforts to increase the number of students from India, which in turn  will promote cooperation in the field of education and health.

Sargsyan also believes that there is a serious potential for  development of cooperation in the field of pharmaceuticals, where  India has serious successes. "Undoubtedly, we have a great potential  in the field of agriculture. As far as I know, we have a working  group, and in previous years mutual visits were organized.  I believe  that cooperation in the field of agricultural machinery can also be  quite effective. Serious work is needed in the development of  tourism. We need certainty, in what areas and what should be done so  as not to sound the figures and indicators that are not in tune with  the level of our relations, I mean the trade and economic sphere,  where there is great potential ",  said Sargsyan.  According to the  results of the meeting, Armenian President gave a number of  instructions, which will also be included in the agenda of  Armenian-Indian intergovernmental commission.