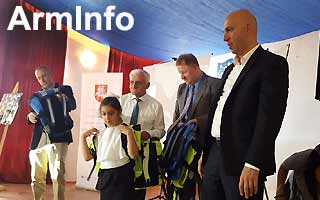 ArmInfo. "Lithuania is one of the leading countries in Europe when it comes to traditions on road safety. Health and safety is also a top priority for Lydian  Armenia. The company has initiated a joint project with the Embassy of the Republic of Lithuania in Armenia on implementing European traditions on road safety in Amulsar surrounding communities," Lydian Armenia says in a press release.

The company has purchased schoolbags equipped with reflectors from  the Lithuanian company "UAB Safe Reflectors". It is obligatory in  many European countries for schoolchildren to wear bags or clothing  with reflectors while on and from the road to school.

On September 1-2 during a joint event of the Embassy of Lithuania in  Armenia and Lydian Armenia, reflector equipped schoolbags were  distributed to schoolchildren of Jermuk, Kechut and Gndevaz (around  600).

The Embassy of the Republic of Lithuania in Armenia had invited  experts from Lithuanian Road Administration who conducted road safety  workshop for the 4 schools in Jermuk, Kechut and Gndevaz.

Talking about the importance of the project General Manager of Lydian  Armenia Mr. Hayk Aloyan noted that it is a priority for the company  to ensure that Amulsar project brings positive development to the  surrounding communities.

"In this context the social projects in the Amulsar adjacent  communities aimed at health and safety have special importance for  us. We want to help implement good European standards of safety at  Amulsar adjacent communities and I want to thank Ambassador of the  Republic of Lithuania Mr. Erikas Petrikas for this joint project. We  hope that this will help to start new culture in road safety not only  around Amulsar but in Armenia".

President of Lydian International Howard Stevenson also participated  in the event.  Lydian Armenia has invested around 7 million Armenian  Drams in the current stage of the road safety project in Jermuk,  Kechut and Gndevaz. The project will expand to the rest of the  communities around Amulsar later on.