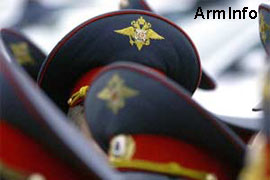 The criminal case on the vicious family murder in Gyumri includes many stories related to the crime scenario. One of the stories says the murderer Valery Permyakov might have acted not alone, Hunan Poghosyan, deputy head of the Armenia Police, told reporters, Monday.

He said the law-enforcers of both Armenia and Russia are thoroughly analyzing every detail and every probable scenario.

"The preliminary investigation will give answers to many questions the public is concerned over. It is untimely to say anything specific now. There is still a probability that Permyakov might have acted in a group," Poghosyan said.

Deputy head of the Police denied the rumors that Armenian law-enforcers detained Permyakov on the Armenian-Turkish border and handed him over to the Russian party. "We have no such information," Poghosyan said. He disagreed with the statements suggesting that the Police displayed insufficient professionalism and consistence in persecuting Permyakov, who occurred in the hands of Russian frontier guards.

"The Police acted operatively. We carefully verified any information or alarm on Permyakov's possible route," he said.

On Jan 12, 6 members of the Avetisyans' family were murdered in Gyumri. Though 2 weeks have passed since the day of the murder, the investigation has not yet reasonably explained the reasons why Valery Permyakov could commit that horrible crime. At the moment, the criminal is staying in the territory of the Russian 102nd military base and the residents of Gyumri still demand transferring Permyakov to Armenian law-enforcers. The only survivor of the Jan 12 tragedy, 6-month-old Seryozha Avetisyan, died of stab wounds on Jan 19.