Oppositionists make an armed attack in Yerevan, with people killed and wounded in shootout 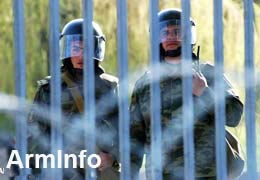 Armed supporters of the Artsakh war hero, leader of the New Armenia movement Zhirayr Sefilyan made an armed attack on the Erebuni Police Department of Yerevan on July 16 night. The shootout killed and wounded people. By ArmInfo's information, the wounded policemen were rushed to Erebuni Medical Center, where doctors are fighting for their lives. By unconfirmed data, Sefilyan's supporters have taken one of the Armenian Police deputy chiefs hostage.

There are no official reports about the incident yet.

On June 20, 2016, Zhirayr Sefilyan was detained on suspicion of organizing a criminal group. 8 persons face charges of acquisition and keeping of weapons and ammunition. 6 have been arrested and 1 is wanted.  According to the Special Investigative Service of Armenia, Sefilyan and his supporters were planning to seize buildings of state importance in early April. Two-month arrest has been chosen as a measure of restraint against Sefilyan, however, his supporters think the case is a frame-up and the arrest is political persecution for his political views, activities and statements about the territorial losses the Armenian side suffered during the April war.