Nikol Pashinyan: Tigran Arakelyan is a political prisoner and must be set free 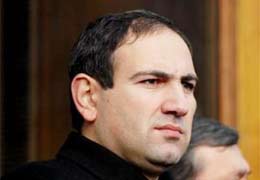 Nikol Pashinyan, an oppositionist parliamentarian representing the Armenian National Congress Faction (ANC), declared in the Parliament Monday that the authorities continue political persecution of Tigran Arakelyan, a young activist of the ANC.

"Considering President Serzh Sargsyan's amnesty proposal and the fact that the court has neglected the guarantees of eight parliamentarians for proper behavior of Tigran Arakelyan after release, Arakelyan can be considered a 'political prisoner.' Consequently, I demand his immediate release," Pashinyan said.
In response, Parliament Speaker Hovik Abrahamyan strongly recommended Pashinyan not to 'assume responsibilities of the prosecutor general.'

The Parliament is expected to study the president's proposal on amnesty announcement on occasion of the 22nd Independence Anniversary of the country.
Arakelyan and other activists were arrested on August 9 2011 during a clash with the police in Yerevan.  Arakelyan was sentences to 6 years in prison. Another three activities were sentenced to 2-3 years in prison. The ANC qualified the court verdict as a political order.