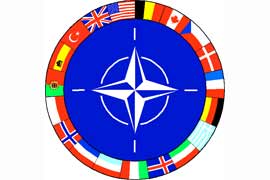 Challenges in the South - mainly in the Middle East and North Africa, and in the east that have emerged from Russia's aggressive actions in Ukraine are most important to NATO.

The Alliance will keep these issues in the focus of attention within the coming year, James Appathurai, the NATO Secretary General's Special Representative for the Caucasus and Central Asia, told a news conference organized by the Region Research Center.

In his words, Article 5 of the Washington Treaty regulating the NATO activity stipulates that an attack on one shall be deemed equivalent to an attack on all, that Allies are obliged to respond. Unfortunately, Appathurai said, the situation in the world has become more instable and potentially dangerous over the last decades. "In the east, Russia has illegally annexed Crimea and continues destabilizing the east of Ukraine, including through direct support to the separatists," he said.

That is why, the NATO representative said, the Alliance has taken a range of measures to comfort the allies that feel themselves more vulnerable now. The Alliance develops new skills and conducts more drills comparing to the recent period. Apparthurai believes that this tendency will be continuous, as the threats the world is facing will hardly disappear soon.

He emphasized that NATO's actions to support its allies and the drills it conducts fully meet the international commitments, including the Venice document and CFE Treaty.