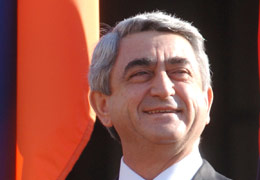 A group of France-based Armenians will go on a three-day sit-down strike during the Armenian President's visit to Strasbourg.

Gala TV channel quotes journalists Lilit Simonyan as saying that some Armenian politicians in France are disappointed with the President's decision to join the Customs Union and must be willing to express their protest by means of this strike.