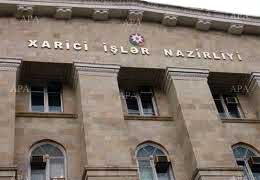 The Azerbaijani Foreign Ministry has reacted to the Armenian bill prepared by opposition lawmakers Zaruhi Postanjyan and Hrant Bagratyan.

Azerbaijani media outlets report that Hikmat Hajiyev, spokesman for the Azerbaijani Foreign Ministry, thinks Armenia's recognition of Nagorno-Karabakh's independence will put an end to the OSCE Minsk Group process. "In case of such recognition the OSCE Minsk Group will be deprived of its mandate," Trend quotes Hajiyev as saying. "This is a striking example of abuse and arbitrary treatment of the Minsk Group process, its co- chairs and international community. International community must adequately respond to these provocative actions of Armenia," Hajiyev said.

On May 3, Yerevan made statements at various levels that at the moment Armenia is not going to recognize Karabakh's independence. Deputy Foreign Minister of Armenia Shavarsh Kocharyan said that Armenia would recognize Karabakh in case Azerbaijan resumes its large-scale aggression in the Karabakh conflict zone.

In addition, the Government of Armenia will discuss a Bill recognizing the Republic of Artsakh (Nagorno-Karabakh) on May 5. The Bill was submitted by the opposition MPs Zaruhi Postanjyan and Hrant Bagratyan. The rationale for the Bill is the outcome of the discussions on the issue between representatives of Armenia and Karabakh. In case the Government approves the Bill, it will be submitted to the National Assembly.  Earlier, Zaruhi Postanjyan had submitted a similar bill twice, but the parliamentary majority killed the bills saying that recognition of NKR by Armenia will stop the peace talks.