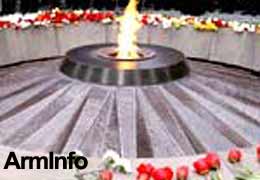 The Senate of Italy has adopted a bill criminalizing the denial of Holocaust and other genocides.

To remind, in December 2011 the National Assembly of France approved a bill banning public statements expressing denial of the fact of the Armenian Genocide. However, in Feb 2012 the Constitutional Court rejected the bill, qualifying it as an attempt to undermine freedom of expression in the country. Meanwhile, French President Francois Hollande has repeatedly stressed the need to adopt that bill.

To note, on 5 September 2014, Bruno Le Roux, leader of the Socialist Party in the French National Assembly, said at a press conference in Yerevan that in 2015 France may adopt a law criminalizing the Armenian Genocide denial. On September 4, French MP Valerie Boyer filed a new bill criminalizing the denial of genocide and crimes against humanity of the twentieth century