President: "Armenia expects EU member States, as its partners, to fully engage themselves and display consistency in order to remove illegal blockade of Armenia by Turkey" 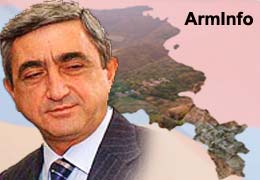 "The Eastern Partnership should become a natural bridge that promotes integration from the Atlantic to the Pacific Oceans. In this sense we are committed to undertake consistent efforts towards building a more inclusive Europe free of dividing lines," said President of Armenia Serzh Sargsyan in his speech at the ongoing third Eastern Partnership Summit in Vilnius, the press-service of the Armenian President said.

"This very understanding is the guiding milestone of our foreign policy, and it is precisely in this vein that we seek to settle problems with our neighbors by attempting to internalize the success stories of reconciliation in Europe at a regional level. I believe that consistent adoption of the European values can help Turkey to reconcile with its own past. Today thousands of Turkish people condemn the Armenian Genocide and stand by us to commemorate the victims of the Genocide. I believe that on the eve of the Armenian Genocide Centennial the Turkish authorities should be able to demonstrate will and decline the policy of denial. In order to continue its integration with the European Union in a capacity of a European nation Turkey still faces the challenge of opening the last closed border in Europe and establishing diplomatic relations with Armenia. We expect that the EU member States, as our partners, will fully engage themselves and display consistency in order to remove the illegal blockade of Armenia by Turkey," he said.

Touching upon the latest meeting of the Presidents of Armenia and Azerbaijan that took place upon the mediation of the OSCE Minsk Group Co-Chairs in Vienna after a pause of almost two years, the president said that the fact of the meeting in itself is a positive phenomenon.
"It is important to emphasize that the successful outcome of the negotiations in reality depends on our ability to reject the negative rhetoric and ease the tension on the Line of Contact. Armenia and Nagorno Karabakh have refrained from statements and steps that could destabilize the situation and embarked on the road of state-building founded upon democracy, human rights, free economic competition and freedom of speech, and unwaveringly move in that direction," he said.
For conclusion, Serzh Sargsyan said that there are high expectations from the Vilnius Summit.
"We view this Summit as an important stage in the development of our relations with the EU on a more streamlined and realistic foundations.It is exactly in this context that we read the final document of the Summit and Armenia-European Union Joint Statement," the president said.