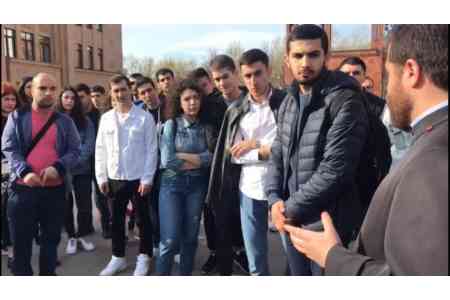 "The official reason for refusal: concern for the safety of the participants of the action. At the same time, representatives of the church offered to hold a rally in the  parking lot of the church, arguing that this territory is owned by  the Armenian diocese, which is not true. Thus, holding a rally in the  parking lot outside the church building would be considered an  unauthorized rally with appropriate sanctions. The real reason is not  official.

From conversations with representatives of the church, it became  clear that the ban on holding the rally was the decision of the  Archbishop Yezras in connection with a personal conflict with one of  the chairmen of the partnership organization'', the statement reads.  The Union believes that putting the personal interest above the  interest of the Armenian people, canceling the event previously  agreed in hours before it began, refusing to hold the rally of more  than 300 people who are not indifferent to the memory of their  ancestors is a depressing fact. "The church is not the property of  one person, it is the property of the Armenian people. We sincerely  regret that this postulate is not perceived by representatives of our  clergy. We are sorry that the Armenian Church, which throughout  history has been the center of unity of Armenians, in Moscow today  basing on the decision of one person, fails to unite Armenians around  itself and contributes to the creation of numerous conflict  situations, "the statement reads.