Atom Janjughazyan to keep his post as finance minister of Armenia 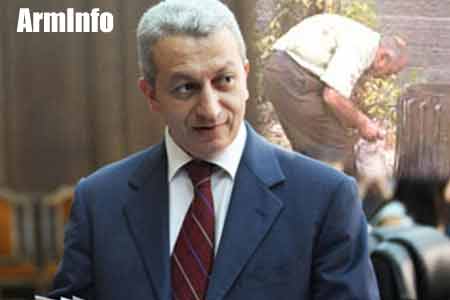 ArmInfo. Atom Janjughazyan will keep his post as finance minister of Armenia. National Assembly of Armenia at its meeting on April 18,  with 41 votes "for", 67  "against" and 1 "abstaining"rejected the initiative of the "Bright  Armenia" opposition faction proposing the Prime Minister to dismiss  the minister .

According to the leader of the faction Edmond Marukyan, the very  absence of Janjughazyan at today's meeting of the parliament speaks  about the attitude of the government members to the legislative body  of the country.

To note, the "Prosperous Armenia" faction joined the "Bright  Armenia's" initiative. However, the ruling faction "My Step" voted  against the submitted resolution, which affected the outcome of the  vote.  It should be noted that yesterday Edmon Marukyan stated that  RA Minister of Finance Atom Janjughazyan showed disrespect for the  constitutional body.

"The faction submitted a request for the government structure in the  hope of hearing clear answers about the number of jobs being reduced,  the further fate of these employees, and in response only heard an  expression like" wait and you will see, "said Edmon Marukyan. The  lawmaker stressed that the RA government not only did not give  answers to the questions raised by the faction, but rejected all  their proposals without exception. The discussions showed, the  parliamentarian continued, that the situation with the upcoming cuts  of 10 thousand employees is simply shameful, and the minister's  answers are the worst manifestation for a country applying for the  role of a parliamentary republic. "In this regard, based on the  powers granted to the MPs by the RA Constitution and Article 121 of  the Constitutional Law" On the Rules of Procedure "of the National  Assembly, the faction will submit a draft proposal to the Prime  Minister on the resignation of the Minister of Finance" the lawmaker  said, adding that according to the current legislation, the document  is not discussed, but immediately put to the vote.