Head of Heritage Party Faction: Serzh Sargsyan was to respond to Nazarbayev's statement in Astana 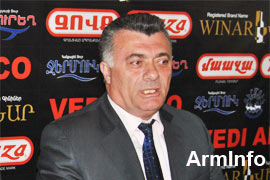 Armenia must not allow Artsakh's interests to be ignored by the Eurasian Economic Union, Ruben Hakobyan, Head of the Heritage Party Faction, told reporters, Friday.

"Maybe Artsakh cannot access that structure officially, but it can involve in it informally. I cannot say if Yerevan will refuse that integration project if they do not agree to admit also NKR. We must be ready for any scenario," Hakobyan said.

He thinks that President Serzh Sargsyan was to respond to his Kazakh opposite number's statement in Astana. "Nazarbayev's statements must not surprise us. Kazakhstan has repeatedly openly protected Azerbaijan's interests," he said.