Newspaper: Suren Khachatryan sets part of his property for sale 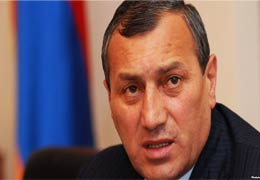 In has been repeatedly reported that the former governor of the Syunik Region Suren Khachatryan is going to leave Armenia for a while and settle in France.

A Yerevan-based Zhamanak Daily writes Khachatryan has already set part of his property for sale.  Particularly, Khachatryan owes several petrol and gas filling stations, a sausage production shop, a number of lands and premises that he used to lease to privates and companies.

To recall, Khachatryan resigned from the post of the Syunik Governor following shootouts in front of his house on June 2 2013 when the former candidate for Goris mayor Avo Budaghyan was killed and his brother Artak Budaghyan, a commander at a military unit in the NKR was wounded.  There was another wounded, Nikolay Arustamyan, a relative and bodyguard of Governor Suren Khachartyan.

A criminal case was initiated on the basis of Article 103.1 (murder) and Article 235 (illegal use, storage and bearing weapons) of the Criminal Code of Armenia. Syunik Governor Suren Khachatryan's son, Tigran Khachatryan, was arrested over the shootouts. Earlier, the governor's bodyguard Zarzand Nikoghosyan was arrested over the case.  On June 3 Suren Khachatryan sent in his resignation declaring that everyone must answer for their mistakes.  He regretted for failing to prevent the tragic incident near his house.

On July 9, the brother of Avetik Budaghyan was charged with Article 137.1 of the Criminal Code.  On 7 September the Investigation Service Department for Special Cases at the Defense Ministry of Armenia set free Khachatryan's son and bodyguard claiming that they acted for self-defense.