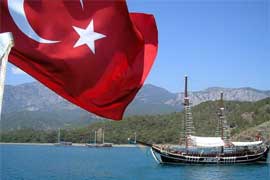 The Turkish ROKETSAN company will complete the deliveries on Azerbaijan's orders by the end of the year, ROKETSAN told APA.

The significant batches of T-122 Sakarya multiple launch rocket systems and missiles offered by Azerbaijan have already been delivered. T-300 "Hurricane" missiles (named as Kas?rga) are under production and testing and have been modernized compared to relevant systems in the arsenal of the Turkish Armed Forces.

The universal launch rocket system produced by ROKETSAN for Azerbaijan allows firing rockets with 122 and 300 mm caliber.
T-122 Sakarya multiple launch rocket systems purchased by Azerbaijan from Turkey were demonstrated in Baku military parade in June, this year. These systems with long-range missiles are capable of destroying enemy targets at a distance of 40 km.