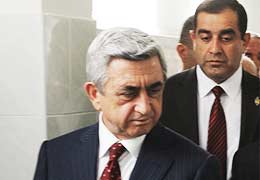 President of Armenia Serzh Sargsyan Submitted an amnesty proposal to the National Assembly for deliberations on 30 September. The amnesty announced is timed to the 22nd Independence Anniversary of the Republic of Armenia, the presidential press-service said.

The last time amnesty was announced in Armenia in 2011 on occasion of the 20th Independence Anniversary of the country. Then, amnesty applied also the convicts over the March 1 2008 case Sassun Mikaelyan and Nikol Pashinyan, who were declared political prisoners by the opposition.