Edward Nalbandian: Armenia will continue its efforts towards the settlement of the Nagorno-Karabakh conflict 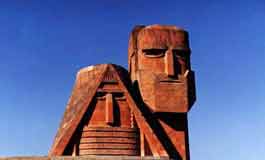 "Regardless of Azerbaijan's destructive stance, Armenia will continue its efforts towards the settlement of the Nagorno-Karabakh conflict exclusively through peaceful means and on the basis of the purposes, principles and norms reflected in the UN Charter and the provisions of L'Aquila, Muskoka, Deauville, Los Cabos and Enniskillen statements of the three Co- Chair countries' Presidents," said Edward Nalbandian, Minister of Foreign Affairs of the Republic of Armenia, at the General Debate Sixty-eighth session of the United Nations General Assembly New York.

"Three months ago, on June 18th the Presidents of the three Co-Chair countries of the OSCE Minsk Group - Russia, United States and France, made a new statement on Nagorno-Karabakh in the framework of G8 Summit in Enniskillen.

In Armenia we welcomed this statement saying that, as the Co-Chairs, we continue to believe that the elements outlined in the statements of the heads of the Co-Chair countries over the last five years can be the basis for reaching a fair and lasting settlement of the conflict. We share the position of the Co-Chair countries, that those elements should be seen as an integrated whole and that any attempt to select some elements over others would make it impossible to achieve a solution. We absolutely agree that peoples should be prepared for peace, not war. Unfortunately until now the Azerbaijani leadership is doing just the opposite and is increasing warmongering and anti-Armenian hate-speech on a daily basis using even the highest podium of the United Nations," the president said.

The minister said that Azerbaijan is pretending that the international community shares its approaches and it shares the approaches of the international community. "In reality, Azerbaijan is continuously rejecting all proposals of the internationally mandated OSCE Minsk Group Co-Chair countries. Baku rejected all versions of the Basic Principles of the settlement of the Nagorno-Karabakh conflict proposed by the Co- Chairs of the Minsk Group, including those presented at the Kazan (June 2011), Sochi (March 2011), Astrakhan (October 2011) and Saint Petersburg (June 2010) summits.

Baku refused not only the Basic Principles, but also confidence-building measures proposed by the Co- Chairs on consolidation of ceasefire, withdrawal of the snipers from the line of contact and the establishment of a mechanism for investigation of the ceasefire violations.

Azerbaijan not only obstructs confidence-building measures, but also periodically organizes provocations on the line of contact with Nagorno-Karabakh and on the border with Armenia, which result in new casualties.