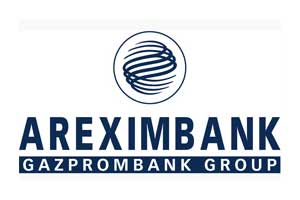 Areximbank-Gazprombank Group has awarded the winners of the campaign it has conducted jointly with the MasterCard international payment system.
The press service of the bank reports that the awarding ceremony took place on Thursday.

The campaign involved almost 2,600 people. The 45 most active holders have been granted iPads, digital video cameras, iPods. The grand prix of the campaign was iPhone 5.  According to ArmInfo's Armenian Banks in Card Business bulletin, as of Oct 1 2013 Areximbank-Gazprombank Group had almost 33,000 active cards, including 10,000 MasterCards. The bank has 78 ATMs (mostly in Yerevan) and 325 POS-terminals.
In Nov 2007 Gazprombank acquired an 80% stake in Areximbank. In July 2008 Gazprombank's stake grew to 94.15%. In Sept 2008 the Russian bank bought the remaining 5.85% from Raiffeisen Bank to become the sole owner of Areximbank- Gazprombank Group CJSC.