Raffi Hovannisian: Armenia should be without President Serzh Sargsyan 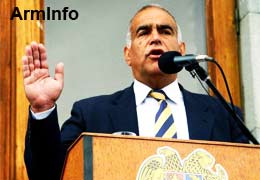 The political and civil forces should join efforts to change the power in Armenia, Leader of Heritage Party Raffi Hovannisian told journalists on Saturday.

He said that all political and civil forces should rank the interests of the Armenian society and the state higher than their own ambitions and launch a joint struggle.

He said that Armenia suffers from lawlessness and that the reason is obvious: "The illegitimate president cannot demand legitimate actions from his subordinates". He recalled that short while ago many reproached him for the fact that he continued respecting the incumbent President Serzh Sargsyan. "Now I say that Armenia should be without President Serzh Sargsyan if we want prosperity and reforms", he stressed.

Hovhannisyan added that he comes out for the cooperation of the four non-coalition parliamentary forces.  "This cooperation can give tangible results and it naturally should be continued", he said. He added that Heritage would not give time to the ruling regime until autumn and would launch the process of constitutional change of power now. "But since the time is specified, there will be a hot summer and "extraordinary" rallies", he said.