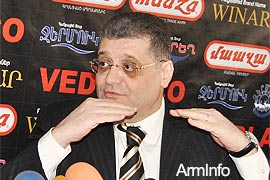 Mr. Karapetyan, the Armenian authorities
and the opposition represented by Heritage Party and its Leader Raffi
Hovannisian demonstrate willingness for a compromise and dialogue but fail to
agree on technical issues. Do you think that they are really ready to sit at a
negotiating table and what specific tasks do they settle?

I think, today Armenia has other more
global and significant problems than the dialogue between Sargsyan and
Hovannisian. I’d like to outline the economic and military components. What is
happening today is PR campaign for the incumbent authorities. Serzh Sargsyan
wants to show that he is a legitimate president. He has also been demonstrating
constructiveness and readiness to make concessions for the leader of the
opposition in the person of Raffi Hovannisian, and is ready to change something
in the government. To be short, he has got the image of the pan-national wise
leader. I cannot say, what task Raffi Hovannisian has been resolving. My
political knowledge does not give me an opportunity to understand, what the
leader of the Heritage wants, why he went on hunger strike, especially that he
used to go on hunger strike at the Liberty Square earlier. All this is not
clear to me. Anyway, I can say for sure that Raffi Hovannisian legitimated
Serzh Sargsyan's power. And Serzh Sargsyan's legitimacy is on Raffi
Hovannisian's head.  If Hovannisian's
purpose is to change the situation in Armenia, he had to understand long ago,
that even if Serzh Sargsyan fully changes the government, dissolves the
parliament and appoints new governors, nothing will change, if the system  remains the same. We need to change the economic
policy, determine the geo-political vector, develop democracy in the true but
not virtual sense of this word. What is happening today is just a performance,
and smart people understand it.

For instance, the ambassadors of the USA,
German and Poland, who harshly criticized the actions of the authorities with
regard to the Civilitas Foundation and its founder Vartan Oskanian…

Even in Africa you will not be able to see
foreign ambassadors so harshly criticizing local authorities or law enforcers.
It is obvious that our regime is beginning to ignore the rules and to play with
its own self. They have gone beyond the limits, and the Civilitas case is just
one example of their political incompetence and anarchy. Such policy will
finally lead to shakes and even revolution.

Are there any people or forces that are
potentially able to undertake this revolution?

I think that these are the people that do
not participate in this performance. It will be a cohort of persons and not
political forces. Persons, personalia make revolutions not political forces.

Let’s return to the issue of Civilitas and
Oskanian…

The processes around the Civilitas
Foundation and the criminal prosecution against ex-foreign minister of Armenia
Vartan Oskanian are the result of the Armenian authorities' resistance to the
West. Through Oskanian and the Foundation founded by Oskanian, the National
Security Service is trying to find the modular foundations and organizations
that financed Civilitas. These are American, Norwegian and German organizations.
Here I see analogues with the actions of the Russian law-enforcers, who search
the buildings of non-commercial organizations. The Armenian authorities'
actions are an attempt to resist the immense pressure exerted by the West. This
pressure is exerted on the elite and Serzh Sargsyan, whom the West has never
considered apart from the oligarchic system.

The West exerts pressure by means of money,
the meaning of the Armenian oligarchy's life. The oppositionist thinks that the
money of oligarchs is mostly kept in the Western banks, and today the Western
elites have apparently decided to cover up this money or to return only 20-30%
of it. The excitement around Cyprus and the nervous response of Moscow speak
volumes. The Cyprian authorities' decision to impose a tax on deposits at the
Cyprian banks is a direct blow on the interests of Russian oligarchs and
affiliated Armenian oligarchs. It is clear that the Armenian authorities will
apparently resist. And the persecution against the Civilitas Foundation is the
result of that resistance.

In this context, Raffi Hovannisian with all
this advantages and disadvantages has managed to create a powerful pro-Western
oppositional structures criticizing Sargsyan’s power. In this light, Sargsyan
is surprised that the West does not fund Hovannisian. In addition, to sign the
Association Agreement Armenia is to fulfill very tough conditions and after
Cyprus Brussels will even more toughen its position. As far as I know, the
European Union intends to set conditions also regarding the Karabakh issue. It
is not financing. It threatens with very serious consequences for Serzh
Sargsyan.

You have mentioned economic problems as the
most urgent ones. What adequate measures should the country’s leadership take
to resolve these problems?

First, I mean the Abkhazian railway,
development of effective economic models to raise investments. We should
achieve opening of the railway by all means possible. However, I see no
sufficient efforts by the Armenian party. There are no efforts due to two
reasons: political poor-judgment and unwillingness to make debts and
negotiations with Russia, Abkhazia and even the USA that may suddenly interfere
into the situation, which seems very painful for our authorities.  The Armenian Government does not need a
headache like negotiations for opening of the railway. Serious countries with
serious authorities act differently. They are well aware that the Armenian
factor will be used. From the geopolitical point of view the factor of
Armenians and Armenia is still unused. If we were smart we would use it the
first and play on the interests of all the geopolitical centers to gain benefit
like once Israel did.