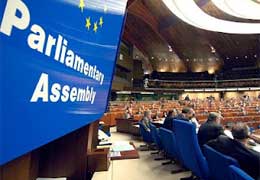 Motion of 31 PACE delegates to deprive Armenia of chairmanship of the Committee of Ministers of the Council of Europe failed, a member of Armenia's delegation to PACE, Naira Zohrabyan, told Arminfo correspondent.

"As a result of discussions, it became clear that these delegates are considered to be the delegates which eat caviar brought from Azerbaijan. For this reason, PACE thought the given motion is not serious", - she said.

To recall, a group of PACE delegates issued a motion to resolution on Armenia's chairmanship of the Committee of Ministers of the Council of Europe. The motion signed by delegates from UK, Spain, Finland, Belgium, Bulgaria and Ireland, says Armenia was welcomed as a new PACE member 12 years ago.

"Expectations both in the Council of Europe as in the global international community were that Armenia's membership to our European forum for democracy would contribute to an acceleration of the pacification of the South Caucasus.

In several resolutions by the international community, Armenia was clearly identified as an aggressor State which was repeatedly condemned for armed aggression, also by the Council of Europe, as Armenia's attitude in this regard is in clear contradiction with the Parliamentary Assembly's fundamental principles," the motion reads.

The delegates express their concern over this attitude by Armenia.

We further recommend to the Bureau of the Assembly that a report and resolution be produced on the failure of the Armenian authorities to comply with international resolutions. This report should also include an assessment of initiatives which in this regard were taken by the Assembly since the moment Armenia joined the Council of Europe.

The Assembly's report should clearly identify the main obstacles and political actors and their responsibility, and draw the appropriate conclusions. Concrete recommendations for the near future should be formulated and this topic should be put high on the agenda during the Armenian chairmanship."