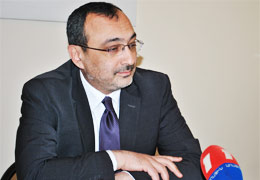 Our current main goal is to achieve the settlement of the conflict between Azerbaijan and Nagorno Karabakh. The restoration of a full-fledged negotiation format with immediate and direct participation of the NKR in all its phases is very important: the absence of one of the main parties to the conflict at the negotiation table makes it difficult to achieve any real progress, the NKR Foreign Minister, Karen Mirzoyan, said in an interview with The European Times.

He also added that thanks to the tireless efforts of the Karabakh people, as well as to the support of our compatriots outside, the NKR economy gradually began to restore and now it has strong potential for investments.  Nagorno Karabakh has drawn major foreign investment in mining industry, ICT and agriculture.  "The investors are attracted by our skilled working force and open, liberal investment environment", he emphasized.

"We are building now strategically important highway, connecting the town of Martakert in Karabakh with the town of Vardenis in Armenia, which should be completed by the end of next year.The rehabilitation of Stepanakert airport will also offer additional investment attractions and give a strong impetus for the tourism development in the country"- he said and added: "Some say that Nagorno Karabakh is where Europe ends; we say it is where Europe begins".