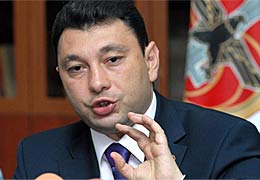 As parliamentary opposition demanding a new extraordinary meeting of the National Assembly to discuss the latest attacks on oppositionists, Vice Speaker Eduard Sharmazanov calls the behavior of the opposition parties as both natural and certainly dramatized.

Talking to reporters, he recalled that the Republican Party condemned the incident immediately and he personally urged the law-enforcement to inquire into it and expose the criminals. The Police have exposed the man who attacked the parliamentarian, Sharmazanov said. He is sure that the attack was not driven by any political motives. "Demanding a new meeting with a different agenda at the beginning of the meeting runs contrary to the Regulations of the National Assembly," Sharmazanov said.

He is sure that the opposition parliamentarians are well aware that their demand is illegal but they still insist on it. "This means that they make a political show or just seek a reason not to work," Sharmazanov said.

The unknown burned cars of four oppositionists lately, beaten up three Artsakh War veterans who harshly criticized the authorities, and attacked oppositionist parliamentarian Aram Manukyan and later his comrade Ashot Piliposyan. All these people claim that the authorities are behind those incidents.  On 15 December, the Police detained Arshak Svazyan (born in 1973) suspected of beating Aram Manukyan. It is widely rumored by local media outlets that Svazyan is the former driver of Arakel Movsisyan (Shmays), MP from Republican Party of Armenia.  Meanwhile, Movsisyan denies these reports and swears that he bears no relation to the attack on Manukyan.