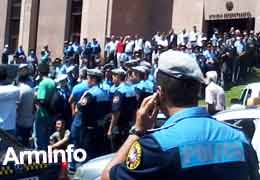 The police have detained several participants in the protest action near the Indoor Market in Yerevan. ArmInfo's correspondent reports from the scene that the action is still going on, the police have managed to separate the activists and the crowd of the so-called "local residents". To note, those who introduce themselves as "local residents" support the construction of the supermarket in the area of the Indoor Market.

Unlike the members of the civil movement "Let's save the monument from the oligarch", the so-called "local residents" are rather aggressive and try to get through the police's blockade and talk to the activists.

The protesters are discontent with the fact that despite the Armenian Culture Ministry's numerous statements about the illegality of the construction, the Indoor Market will open as an ordinary supermarket on September 15. To note, the owner of the Indoor Market is oligarch-parliamentarian Samvel Alexanyan.