Head of ACNIS: Philosophy of ignoring strategic core of Armenian problems since 1998 has led to collapse of political system in Armenia 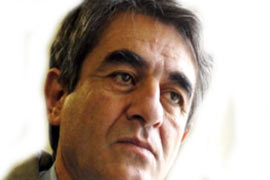 The philosophy of ignoring the strategic
core of Armenian problems since 1998 has led to the collapse of the political
system in Armenia, Manvel Sargsyan, Head of the Armenian Center for National
and International Studies, told ArmInfo.

"The collapse was accompanied by full
obedience of the country to the external factors. One could observe the consequent
consolidation of the process of take-over in Armenia by the Karabakh military
and political structure, expansion of the Armenian Genocide international
recognition problem in the Armenian-Turkish relations, full military obedience
of Armenia to the Russian factor. Armenia's system of security and foreign
policy fell under the dictate of the USA-Russia-France triarchy", he
stressed.

Sargsyan is convinced that such a
political concept of Armenia has deprived official Yerevan of the abilities and
capacities to resolve the key Armenian problems - the Karabakh conflict and
recognition of the Armenian Genocide. He also thinks that the political power
in Armenia, the society and the foreign policy have found themselves as
hostages of the foreign Armenian problems.

"This has resulted from the fact that
the political elite realized that it is impossible to build a state in Armenia
and they named the foreign obstacles (Karabakh and Genocide) as the key reasons
of that.  They started to make wrong and
opinionated statements like "it will be impossible to build a legal state
and ensure its economic development until the Karabakh conflict and the problem
of Armenian-Turkish relations are settled. "In the meantime, they did not
consider a single circumstance directly related to Armenia as an obstacle to
the state building," said the analyst.