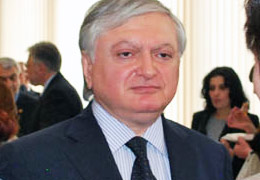 The two ministers welcomed the mutually advantageous high-level cooperation of Armenia and Iran and participation of Armenian President Serzh Sargsyan in the swearing-in ceremony of Iranian President Hassan Rouhani. The sides discuss cooperation of the Armenian National Assembly and the Majlis of Iran and stressed the importance of the activity of the parliamentary friendship groups.

They discussed also the efforts to manage the Syrian crisis, the negotiations around the Iranian nuclear program and welcomed the positive trends in that process. The two ministers also touched upon the Karabakh peace process. Minister Javad Zarif reaffirmed his country's readiness to assist the conflicting parties in the process. Edward Nalbandian, in turn, invited his Iranian counterpart to Armenia.