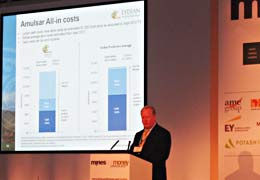 Last week from December 2-4 the annual Mines & Money Conference and Exhibition was held in London, UK.  According to Geoteam, it is one of Europe's leading mining investment and capital raising exhibitions, bringing together over 3,000 investors, financiers, brokers and mining companies.

This year over 260 companies from all over the world participated in the conference presenting their projects from around the world, in places such as the US, UK, Australia, Canada, Russia, Turkey, South American and African countries.

This is an opportunity for companies and countries to promote their projects and attract international investment.
There were also government delegations from several countries promoting their countries as favorable mining investment destinations.
Lydian has been participating in this prestigious event since 2006 presenting the Amulsar project whilst at the same time introducing Armenia as an investment destination.

In 2011, Lydian was the winner of the Mining Journal ''Outstanding Achievements" Award at the Conference for its discovery and exploration work on the Amulsar project. This was great exposure for the project as well as for Armenia.

The conference was also attended by a number of International Banks interested in contributing finance to developing mining projects similar to Amulsar. One bank attending that has previously visited Armenia and the project was ING based in the Netherlands. Dr Andor Lips, Vice President Natural Resources Metals and Mining quoted "Over the past seven years Lydian International has worked hard across all corners of the globe on promoting Armenia as an investment destination and on demonstrating a successful business approach in Armenia through the initial development of the Amulsar project. The pro-active approach adopted by Lydian, and its engagement with all stakeholders, combined with the strong production performance characteristics as suggested by the excellent geological and technical fundamentals of the Amulsar project, provide a firm basis to successfully build the first modern gold operation in Armenia".
Representing Lydian at the conference was Mr Roderick Corrie, Chief Financial Officer of Lydian International who said "At this time of economic volatility it is not an easy job to attract investment into the mining sector, especially into a relatively unknown investment destination such as Armenia.  However, Lydian has made a huge effort in promoting Armenia.  With international shareholders involved such as the IFC and EBRD, we are hopeful that the Amulsar project will be a success story both for other investors and for the country as a whole."