Rasim Musabekov: Not only global but also the regional geo-political balance is changing 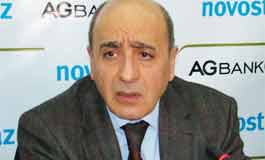 Many say
that nothing changed around Karabakh for the last 20 years. Meanwhile, the geo-politics
around the conflict has radically changed. The conflict around Ukraine, Russia’s
new role and deeper disagreements between the co-chair states of the OSCE MG,
etc. May all this result in  birth of a
new situation around settlement of the Karabakh conflict?

If nothing
has changed in the deadlock situation around the Karabakh settlement for the
last 20 years, serious changes happened in the global (the USA, EU, Russia
and China), as well as
regional (Russia, Turkey, Iran) sector of the geo-policy.

In future
this may affect the Karabakh conflict settlement process. However, at present
all the three co-chairs of the OSCE MG have close positions, as they are for
settlement of the Karabakh conflict through negotiations based on the
compromising Madrid
principles. It is hard to say if this consensus will be preserved in future, in
case of worsening of the crisis in Ukraine.

Not only of
the global but also of the regional geo-political balance has changed. If 20-25
years ago, the military, political, economic and cultural domination of Russia in the South
Caucasus was obvious, at present the situation differs. Not much
has remained
from the former strong South Caucasus Military Command able to independently
confront Turkey and Iran, and from
the Baku Air Defense Command. As for the Russian military bases deployed in
Gyumri, Abkhazia and South Ossetia, even after their strengthening, they cannot
be compared with the military potential even of the South Caucasus states,
and  moreover, of Turkey and Iran. In the demographic, economic
and political sense Turkey
and Iran still lag behind Russia, but they are coming closer to Russia. By the
way, the ratio of forces between the South Caucasus
countries changed much for the last 25 years. If at the moment of the USSR split, the number of population of Azerbaijan doubled that of Armenia, at present it is threefold
more. Taking into consideration the fact that birth rate in Azerbaijan is fourfold more than in Armenia, and
the migration mood in stronger among the Armenians, the demographic disparity
will go on developing. If 20 years ago the economy of Armenia was 60%
of the Azerbaijani one, at present it is just 16-18%. Not so much has remained
from the former military parity either, and the Azerbaijani armed forces exceed
much the Armenian ones both by their number and armament.

During the
first halfyear 2014 several dozens of young people died at the border  in the conditions of the “frozen” Karabakh
conflict. In our countries they traditionally and cynically explain these death
cases by the domestic political situation, the electoral periods and by signing
of important contracts. What do you think of it?

Being sorry
about the death of young people, understanding and sharing the sorrow of their
parents, I would not rule out the possibility of such cases happening in future
as well, if there is no progress in the process of peaceful settlement of the
Karabakh conflict. I don't think that the death of servicemen and sometimes  of civilians at the line of contact is linked
with any domestic political
or electoral reasons. The war has not ended, and just truce has been reached so
that to arrange a strong peace. Unfortunately,
we have not yet reached that. So, we shall have skirmishes, firings, local
sabotage operations and the attempts of tactical
improvement of military positions of the parties.

Armenia’s defense minister has recently
offered the OSCE MG co-chairmen to set up a commission to investigate incidents
at the border. However, the intermediaries refused because of “lack of funds”. Why were they so much consolidated?

Such
proposals are in fact directed at conservation of the current status-quo. As
for the intermediaries, they understand that without
development of the peaceful settlement process and deployment of the separating
forces, it is impossible to rule out ceasefire regime breaking. So, they are
more concerned how to stop development of the situation towards resumption of
the large-scale battle actions.

The latest
repressions against representatives of civil society, in particular, Institute for
Peace and Democracy,  dealing with the “people’s
diplomacy” with Armenia, are evidence of unwillingness of the authorities of Azerbaijan
to go towards peaceful settlement of the Karabakh conflict on the basis of the
6 Madrid principles. What is the reason of such steps?

It is
exaggeration to speak about repressions linked with filing a lawsuit against a
journalist Rauf Mikradirov and his arrest. As for the employees of the
Institute, they have been attracted to the case only as witnesses.I know Rauf
Mirkadirov long ago and I would like to believe that he will manage to protect
his reputation and disprove the accusation against him. As for the conclusions,
they may be made at the end of investigation. In Armenia
as well, people were often detained for cooperation with secret services of Azerbaijan. You
should know better, how much all these accusations were grounded.

Azerbaijan is ready to continue talks on Karabakh
conflict settlement on the basis of the Madrid
principles, a member of the Azerbaijani parliament. All the rumors that the
government of Azerbaijan is
not ready to continue the talks on peaceful settlement of the Karabakh conflict
on the basis of the Madrid principles are
wrong.Azerbaijani Foreign Minister Elmar Mammadyarov said that Baku
is ready to the subject negotiations for peaceful settlement  on the basis of Madrid principles. However, Baku is not interested in
the imitation talks or making of the "frame agreements"  which create an illusion of progress in
settlement of the conflict.

What
direct thunders to the nationals security of Azerbaijan exist today besides the
Armenian one?

Azerbaijan manages to neutralize aspiration of
the world and regional superpowers to involve us in the sphere of their
influence thanks to the balanced foreign political course, to preserve
independence and not to turn into somebody's outpost or satellite.

There are
no direct thunders to security of Azerbaijan
but the ones stemming from  Armenia.
Azerbaijan
has been striving to establish good neighborly relations with the bordering
states. We delimited the border to Russia. The borders to Iran
were fixed during the soviet times. As for the disputable issues on the
boundary settlement with Iran
and Turkmenistan at the Caspian sea, they are resolved in the negotiating regime.
There are also thunders stemming from the Islamist groups and movements which
have become more active for the last period of time. However, the Azerbaijani
security and order forces fully control the situation. Azerbaijan has been actively cooperating with Russia
for neutralizing of such extremist groups, which try to penetrate
in the territory of the republic. Azerbaijan
has been also cooperating with Turkey,
Israel and the USA within the
frames of the anti-terrorist coalition. The fact that the Jihad forces did not manage to organize any terrorist act in Azerbaijan for the last period of time is
evidence of  effectiveness of actions by
the Azerbaijani law-enforcement agencies.
All such attempts were detected in time and neutralized.