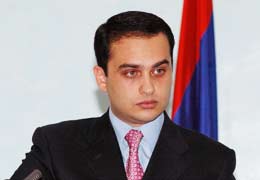 "It does not correspond to reality,"  Soghomonyan told ArmInfo.

Earlier today, a Yerevan-based Zhamanak Daily reported that second president Robert Kocharyan's office decided to establish cooperation with Aristotle. The paper writes that the organization is mainly engaged in grassroots consulting in the US state and political circles in favor of a foreign political figure. John Evans, former ambassador of USA to Armenia, will be coordinating the work with the organization. The source reports that the former U.S. diplomat hopes for cooperation with the U.S. Office of the Hay Dat Bureau and the Armenian Assembly of America.