Fourth Tolma Festival to be held in Armenia on July 16 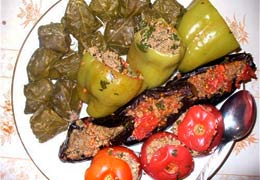 The Fourth Tolma Festival will be held in Armenia on July 16. According to the tradition, it will be held near Sardarapart Memorial on the margins of the Golden Apricot International Film Festival.

Sedrak Mamulyan, Head of "Development and Maintenance of Armenian Culinary Traditions" NGO, has told ArmInfo's correspondent that the festival reveals new and more interesting tolma recipes with every passing year. In addition, due to the tolma festival on the margins of Golden Apricot, the tourists' interest in the Armenian national cuisine is growing. The festival also includes a cultural program, including performances of music bands.

Within the frames of the festival, the longest tolma will be made from vine leaves. Mamulyan does not rule out that the tolma will be listed in the Guinness Book of World Records. Last year's tolma was 7 meters and 10 centimeters long.

Applications are submitted till July 6. This year not only the restaurants but also various organizations, news agencies, as well as the business sector will participate in the festival. Mamulyan thinks that the parliamentary factions may also appear with their teams.
The participants will receive the following awards: Best Appearance, Best Taste, Best Idea, as well as Grand Prix and People's Choice Award. In addition, the best start-up cook will be awarded for the design of the pavilion.

The festival aims to develop tourism and to propagandize the Armenian national cuisine. Tolma is a 3,000- year-old Armenian dish, and the name of the dish derives from the ancient Armenian word "toli", which means grape-vine.