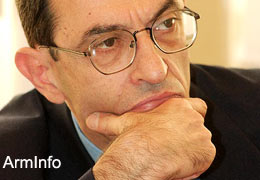 In comment to Azeri Foreign Minister Elmar Mammadyarov's attempt to present the last trilateral meeting of the Georgian, Azeri and Turkish FMs in Batumi as a message against Armenia, Kocharyan said that it is logical that being the foreign minister of an anti-democratic country, Mammadyarov does not understand that in
modern world it is better to be friends with somebody rather be friends against somebody.

"It is time for the Azeri authorities to stop their unpromising efforts to create new dividing lines with the sole purpose to preserve their hereditary authoritarian regime," Kocharyan said.